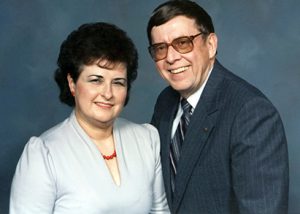 McHenry County College announced that John Radka, formerly of Woodstock, has established the Sally Reuter Radka Family Endowed Scholarship. The new scholarship — honoring the legacy of Radka’s wife and MCC alum Sally Reuter Radka, who passed away at age 82 in 2017 — will award $500 to a deserving MCC student, beginning in the spring 2019 semester. Sally Reuter was a single mother of four children when she entered MCC as a student in the early 1970s. Several years later, she earned a master’s degree in social work (with high honors) and then served her entire professional career as an outreach social worker for the Lake County Special Education District. Following in her footsteps as MCC students were 11 members of her blended family, including late husband Gregory Reuter and second husband John Radka. For more information about the Sally Reuter Radka Family Scholarship, contact the Friends of MCC Foundation at 815-455-8721, send an email to foundation@mchenry.edu or visit www.mchenry.edu/scholarships.

The village announced that longtime Huntley resident Patricia Rubio and her husband, Gus Espejel, will officially open Casa Rubi-os Mexican Kitchen & Bar on Jan. 2, 2019. The new full-service restaurant and bar is located in the former Marsala’s site at 11900 Freeman Road, across from AutoMall. The establishment will be open for lunch and dinner from 11 a.m. to 9 p.m. Tuesday through Sunday, and will serve traditional Mexican specialties. In addition, Cafe Rubi-os will serve full American-style breakfast items, as well as Mexican favorites, from 8-11 a.m. on Fridays, Saturdays and Sundays, and then switch to the lunch/dinner menu until closing hours (11 p.m. Friday and Saturday; 8 p.m. Sunday). For more information, call 847-669-8966 or visit www.huntley.il.us.

The city reported that Chicago-based development company DKI has received approval for a new, affordable senior housing project, centered in the Business Park at 355 Station Drive. The facility includes a 60-unit apartment building and is designed to provide a comfortable living experience that features high-end trim carpentry (including crown molding), vaulted ceilings, chandeliers and artwork. Residents also will have access to a theater room, community area, cafe, library, game room, fitness room and individual storage areas. The apartment units are a mixture of one- and two-bedroom units, each with their own kitchens. The exterior facade is a combination of stone and fiber cement board. The roof uses both architectural shingles and a metal standing seam roof to highlight the facility’s tower elements. In addition, the project qualified for Illinois Housing Development Authority (IHDA) tax credits. Construction is planned to commence in early spring. For more information, call 815-459-2020 or visit www.crystallake.org.

The Johnsburg High School Athletic Hall of Fame Committee recently announced the second class to be inducted into the school’s Athletic Hall of Fame. The class includes four student-athletes, one coach and one team. The inductees are: Cheri Kofler (Class of 1982) — volleyball, basketball and track; Jim Bentz (Class of 1984) — football, wrestling and baseball; Megan Mirs (Class of 1998) — volleyball, basketball and track; Jerad Grundy (Class of 2009) — football and baseball; Ed Sennett — basketball, baseball and football coach; and the 2006-07 girls basketball team — 28-5 record, IHSA Class 2A regional champions, Fox Valley Conference champions and Mundelein Thanksgiving Tournament champions. The inductees will be honored prior to the boys varsity basketball game against McHenry High School on Feb. 2, 2019. The event begins with an open house reception in the cafeteria at 5 p.m., followed by the girls varsity basketball game against McHenry. The induction ceremony will be held in the main gym at 6:30 p.m., followed by the boys game at 7 p.m. Johnsburg High School is located at 2002 W. Ringwood Road. For more information, call 815-385-9233 or visit www.johnsburg12.org.

The village announced that it recently received the Government Finance Officers Association of the United States and Canada’s (GFOA) Distinguished Budget Presentation Award for its Fiscal Year 2018-2019 budget. It marks the 15th year in a row that the village has received the prestigious award. Algonquin also received a special performance measures recognition for illustrating a clear link of operational data to financial decision-making. Algonquin’s Fiscal Year 2018-2019 budget represents a balanced $56 million financial plan that features a property tax levy lower than 2008 levels, and $24.2 million in capital infrastructure investment. The budget document is available for viewing online at www.algonquin.org/finance. For more information, call 847-658-2700 or visit www.algonquin.org.

Lake in the Hills

The village announced that the Lake in the Hills Recreation Department will host its Noon Year’s Eve Party at 11 a.m. Dec. 31 at Village Hall, 600 Harvest Gate. Children (ages 8 and under) and their parents can join together to make party hats and noisemakers, dance to music, play games and welcome the “Noon Year” with a balloon drop. Light snacks and sparkling cider will be served. The fee is $9 (residents) and $11 (non-residents) per child. Pre-registration is required; the deadline is Dec. 29. To sign up, and for more information, call 847-960-7400 or visit www.lith.org.