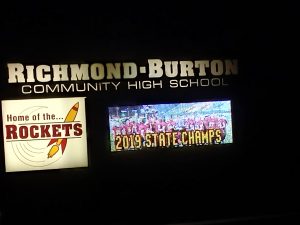 The sign at the entrance to Richmond-Burton Community High School reflects its football team’s state championship, when lit at night. Photo by Gregory Harutunian/for Chronicle Media)

The Illinois High School Association state football championships have concluded, but the recognition and celebrations are still being savored by two McHenry County teams.

Richmond-Burton completed an unbeaten 14-0 season in taking the Class 4A title, while three-time former state champion Prairie Ridge finished 12-1 and came back with a Class 6A second-place trophy.

The state finals were held at Northern Illinois University’s Huskie Stadium in DeKalb, with the competing teams in the different classes playing after the Thanksgiving holiday.

Prairie Ridge played toe-to-toe with the unbeaten East St. Louis Flyers in the Nov. 30 championship game until the 3:24 mark of the third quarter. Tied 14-14, Flyers quarterback Tyler Macon hit tight end Dominick Lovett for a 66-yard touchdown pass, and a 7-yard toss in the fourth quarter’s opening minutes. Flyers defensive lineman Darran Perkins scooped up a Wolves fumble running 90 yards for a score, putting it out of reach 43-21.

The Wolves’ varsity squad was treated to an afternoon school assembly Dec. 6.

“It was to recognize the accomplishments of the team, and I’m very proud of them,” said Chris Schremp, the team’s head coach. “I think the turning point came Sept. 13, when we lost 28-24 to Huntley. I think it opened their eyes about themselves and about the season. The practices got better, they executed the plays better … and this was a rough team (East St. Louis) that we played.

“We’ve won three state championships, so our preparation for this year’s title game was normal, not something out of the ordinary,” he said. “We’re looking toward next year. We’ve also had some college recruiters come by and talk with the players about scholarships. But, for now, let’s take in the moment.”

Richmond-Burton won its second state championship this year, with a 50-14 win over the Murphysboro Red Devils. The Nov. 29 contest was the school’s first championship with state Hall of Fame Coach Mike Noll at the helm.

Known for their defense, the Rockets corralled their opponents by forcing two turnovers and allowing only 234 total yards despite Murphysboro holding the ball for more than 30 minutes of game time and running 61 plays. The Red Devils only reached the red zone once all night, toward the game’s waning minutes. 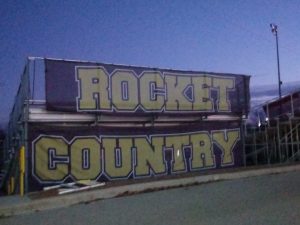 A banner hung over a back section of the stands at the Richmond-Burton football stadium lets people know where they are. (Photo by Gregory Harutunian/for Chronicle Media)

Leading 17-0 at the half, running back Nick Legnaioli (95 yards rushing) took the second-half opening kickoff and zigzagged for an 87-yard touchdown.

Following a fumble recovery, Dalton Wood (107 yards rushing) ran for a touchdown from 7 yards out. It became 38-0 when Tyler Anderson rushed for a touchdown. The running clock was started at the 2:05 mark of the third quarter, as Rey Guajardo ran for a 35-yard TD. The point-after conversion was missed, but the score was 44-0.

In the school gym, the team was feted with a short rally Dec. 1 and a formal celebration with an awards ceremony on the next day.

“The Sunday (Dec. 1) rally was phenomenal, and I never get tired of it because it’s special with each team. The next night, we had the awards ceremony, and it was all very well-deserved. I’m just proud of what the kids achieved, what our staff did, everyone,” said Noll. “They went from start to finish, wire to wire. We’ll continue the same program into next year, with the offseason conditioning, and planning for the 2020 season.”