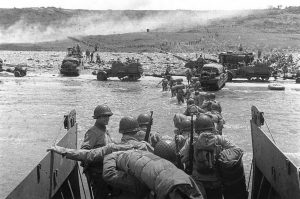 Troops wade ashore from a Landing Craft Vehicle Personnel on Omaha Beach on June 6, 1944. (Photo courtesy of the National Archives)

Seventy-five years ago June 6, the largest amphibious landing ever attempted in history took place on the blood-soaked beaches of Normandy, France.

About 160,000 Allied troops waded ashore along a heavily fortified, 50-mile stretch of beach as part of Operation Neptune, also known as D-Day. They faced withering fire from the cliffs above, as well as all manner of obstacles — both on land and in the water. Prototype floating Sherman tanks swamped and sunk in the surf. Heavy packs rendered lifebelts useless, even hazardous. And occupying German force had had two years to fortify bunkers and position 88mm guns, capable of firing 10 miles.

“(Gen. Erwin) Rommel was pretty smart,” said Ed O’Brien, a historian and re-enactor from Harvard. “He knew the Americans were coming, but he didn’t know when.”

O’Brien will present a tribute to D-Day at noon June 15, at the McHenry County Historical Museum, 6422 Main St. in Union. Experience the battle through the eyes of a captain in the 1st Division, landing on Utah Beach. Admission, which is payable at the door and includes access to the museum, is $8 for Society members and $10 for nonmembers. For information, visit www.gothistory.org.

Troops edged forward from Landing Craft Vehicle Personnel and across a 1,000-foot killing zone during a battle that raged for 12 hours. Of the 1,450 soldiers who were part of the first wave that day, it is estimated that more than a third became casualties within the first hour — many of those commissioned and noncommissioned officers.

“But the men were so well-trained that when a lieutenant went down a sergeant took over and if he went down a corporal stepped up,” O’Brien said. “They were told, ‘You don’t stop for anybody. You keep going or they’ll shoot you down.’”

The battle turned on the courage of 18-, 19- and 20-year-olds “who didn’t know enough to be scared,” O’Brien said. Even before the ramps of thousands of landing craft opened up to a barrage of bullets, many of the men inside had become seasick from the choppy waves or disoriented from the concussion of nearby exploding shells.

Still, they soldiered on.

“It basically was the turning point of the war in the European theater. The Germans had control of Paris and they had control of Rome, until a couple of days before when it fell,” O’Brien said. “It was a tremendous sacrifice and thank God people were there to do it.”

On June 6, 1944, an estimated 2,500 Americans and another 1,915 soldiers from other Allied countries, died in order to save democracy.

“If they had not been successful, we might be under the control of the Nazis today. They had big plans,” O’Brien said. “We probably would