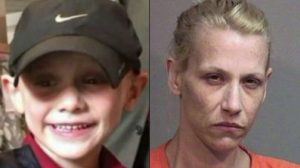 A Crystal Lake mother who played a role in the beating death of her 5-year-old son faces up to 60 years in prison.

Joann Cunningham pleaded guilty Dec. 5 to murder for her part in the April death of her son Andrew “AJ” Freund Jr.

Cunningham, 36, faces between 20 and 60 years in the Illinois Department of Corrections. Pursuant to truth-in-sentencing guidelines, Cunningham will not be eligible for parole and must serve 100 percent of her sentence, according to McHenry County State’s Attorney Patrick Kenneally.

The case is set for a Jan. 30 status hearing on sentencing.

Cunningham had been scheduled to next appear in court on the murder charges Jan. 10. She is being held in McHenry County Jail without bond.

Along with murder, Cunningham and Freund were charged with numerous felonies, including concealment of a homicide.

AJ Freund was reported missing April 18, triggering a search that eventually centered on the family house at 94 Dole Ave., Crystal Lake. The parents had been the subject of neglect and abuse claims from the Illinois Department of Children and Family Services, as well as numerous calls by the Crystal Lake Police Department over the five years of the boy’s life.

AJ’s body was discovered April 24 in a farm field south of Woodstock, wrapped in plastic and covered with straw in a shallow grave. Andrew Freund Sr. allegedly confessed early that morning after being confronted with forensic cell phone data and a recovered cell phone video depicting abuse by the mother.

AJ Freund’s death occurred after being forced to stand in a cold shower for an extended period of time, due to lying about soiled undergarments, and was allegedly beaten to death. The McHenry County coroner attributed the cause and manner of death as blunt force injuries to the head.

Graphic details of the murder, along with the alleged actions of the father, emerged May 1 and began circulating in media outlets.

On an overcast day, several thousand people from Crystal Lake, McHenry County, and farther away came to the Davenport Family Funeral Home and Crematory to pay their respects to a child many never even knew.

A May 3 visitation for AJ Freund triggered an outpouring of support from Crystal Lake and other residents. Blue, AJ’s favorite color, was evident in clothing, balloons and stuffed toys while blue bows were tied to trees and utility poles lined the funeral route.