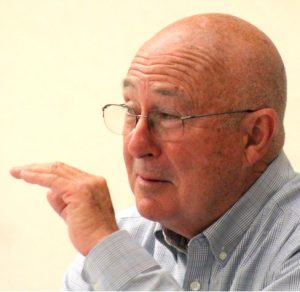 House Bill 0348, which amended the state’s township code to allow a proposition for the dissolution of a township or district, was signed into law by Gov. J.B. Pritzker Aug. 9, after completing passage through both houses of the state legislature in May.

While the onus of township consolidation and/or elimination has taken shape in the form of state and county task force reviews over the last five years, this is the first such action to pass into public law.

In the wake of the new legislation, the Coral Township Board and elected officials have taken the step of forwarding a public notice regarding its next meeting where they will “answer questions concerning the possible aftereffects, if elimination of Coral Township occurs by a voter referendum. The public session is slated to be held at 6 p.m. Sept. 11, in the township offices at 6550 Olson Road in Union.

“It is an open meeting exactly, and that’s what the notice was for,” said Roger Naylor, the township supervisor. “The legislation allows for the electorate to petition the county, if they desire. Should the consolidation or elimination of the township be accomplished, is that a solution to government by letting someone else take care of it? We have to ask the folks, if it is. We have to acknowledge what we need to understand. It’s simply good governance, and ultimately what is best for the township and voters.”

The specific language provides that “the board of trustees of any township located in McHenry County may submit a proposition to dissolve the township to the township electors, or township electors may petition, for a referendum to dissolve a township.” Further, the measure also “Provides for the transfer of real and personal property, and any other assets, together with all personnel, contractual obligations, and liabilities of the dissolving township to McHenry County.

Concerning road districts within the boundaries of the dissolving township, they are dissolved on the same township dissolution date, with its responsibilities transferred to McHenry County. On a financial level, it states “… that municipalities within the dissolving township may elect to assume the duties and responsibilities of the road district or road districts. (It) limits extensions of specified property tax levies to 90 percent of the original property tax levy and within the

boundaries of the dissolved township.

“(It) amends the Illinois Highway Code … that any township in Lake County, or McHenry County, shall abolish a road district of that township, if the roads of the road district are less than 15 miles in length … effective immediately.”

The issue of tax levies, and disproportionate estimated assessed valuations (property taxes rates) that vary from township to township, was a concern in 2015, when then-McHenry County Board Chairman Joe Gottemoller authorized a Task Force on Township Consolidation. Convened on the strength of 800 petition signatures obtained through a volunteer group, the directive was to select a consolidation map for the 18 county townships, from four offerings.

A map recommendation was not forwarded due to the disparity of the E.A.V.s, with one township assuming a higher rate, while another’s would be lowered. The full county board rejected the township consolidation proposal, during an Aug. 22 meeting, that year. Chaired by county board member Carolyn Schoenfeld, Naylor also served on the task force.

“Take the legislation, now law, and ask, what would you like to do,” he said. “We’ll do our best, but what happens with our taxes, debt, assets … following news of the law’s passage, I think the dynamics of the house representative sponsors and the lack of coordination with a larger global context of officials are overreaching into McHenry County … is it following a personal agenda or doing what voters elected you to do?”

McHenry County was founded in 1836, and Coral Township was among the first townships to be settled. It claims a historic legacy including the first established post office between Chicago and Galena.