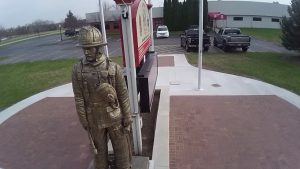 The four fire protection districts in the North Quad are working toward a “functional” consolidation of their departments that would provide benefits in coverage and mutual equipment purchases and discussed initial forays, during a Nov. 18 meeting of the district’s chiefs and members from their respective boards of trustees.

Each district would maintain its distinct identity, and an exploratory committee is the next step.

“The operative word is ‘functional’ and not meant as a total consolidation,” said Spring Grove Fire Protection District Chief Rich Tobiasz. “Our taxes, boards, companies, and equipment would still reflect four separate units … we can do more things together that would benefit us all together such as training, sharing staff, and purchasing equipment.

The North Quad is composed of McHenry County fire protection districts in Spring Grove, Richmond, Hebron-Alden-Greenwood, and Wonder Lake. The grouping has been together for more than a dozen years, and the new name would come under the heading of “North Fire Alliance.” 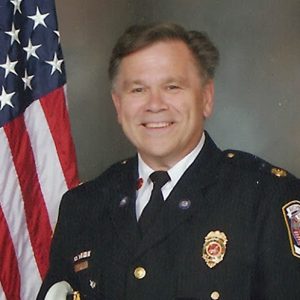 “Its basic purpose is that we’re all in the same boat, and the quad approach is such a benefit,” said Rick Gallas, the Richmond Fire Protection District’s chief. “When Richmond gets a call, the other three departments get the same call, they hear what we hear, and have a pre-planned operation mode for action, as needed. It’s four departments coming together as one, and the immediacy makes it effective.

The concept had been discussed informally, for a number of months, and took shape  Nov. 18 at Spring Grove’s headquarters. Meetings between the four districts are held every other month with Tobiasz, Gallas, Hebron-Alden-Greenwood District Chief Thomas Linneman, and Skip Sorensen of the Wonder Lake District in attendance. Topics are varied and related to the service calls, ranging from dispatching to auto-aid.

“As an example, there’s a shared corridor, Route 173, where Richmond and Spring Grove get dispatched to the service call,” said Gallas. “We can be more efficient, and the idea of group purchases would really save money for all of us.”

Tobiasz noted, “Let’s say Wonder Lake needs 20 air-packs, Spring Grove needs 16, Richmond needs 18 … the price break on that amount by purchasing together would save funds. Other things like having an opening in one district, staff could cover from the other district, as needed.” 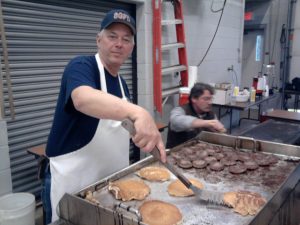 Spring Grove Fire Protection District Chief Rich Tobiasz has been a mainstay with the village, including cooking for the district’s pancake breakfasts. (Photo by Gregory Harutunian/for Chronicle Media)

The current plan is for the chiefs and trustees to return to their respective boards, which will meet during November and December and getting a better reference point. “Probably, after the first of 2018, a committee will be formed of chiefs and trustees that will report back to their boards,” said Tobiasz. “We have to look at how we want this process to be put into place … lawyers have to draft and review the intergovernmental agreements … it’s still ahead of us.”

Illinois has led other states in establishing such joint efforts, and the North Quad combination influenced an offshoot program called the Mutual Aid Box Alarm System (MABAS), which services border areas in Wisconsin and Illinois. By specific definition, MABAS is a pre-arranged plan for response and assistance to a unit through assistance, as maintained by member units. MABAS areas are delineated by box codes for location and coverage, and requests can be made on emergency calls.

As laid out, the box code sheets show a chi-square grid box with several levels based on various departments and their equipment. As the call goes in, the dispatch center reviews the box sheets and will contact a specific department to request assistance to an emergency site or location. Each department has its own page in a master call book, which can lead down to a seven-alarm code.

“Our auto-response calls would normally bring in (Illinois) companies like Hebron, Spring Grove, Wonder Lake, and McHenry for extra manpower to a particular site,” said Gallas. “The MABAS box calls to Wisconsin areas have proven to offer excellent response for mutual assistance, as intended. That collective effort will not be impacted by the North Fire Alliance agreements.”

The next meeting for the North Quad units is slated for January 2018.