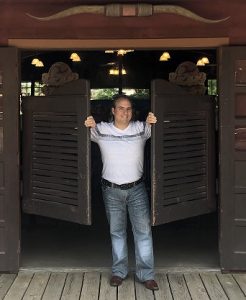 Ron Onesti, owner of the classic Club Arcada in St. Charles, stands in the doorway of the saloon at the new Onesti Wild West in Union. (Photo courtesy of Onesti Corp.)

It evidently started with a dinner trip and an artifact that Donley family members felt would look good in Ron Onesti’s antique-laden Club Arcada in St. Charles.

Discussions turned to Donley’s Wild West theme park, Onesti’s interest was sparked, and then it happened. The famed western-style summertime attraction started the new season May 18 under a new banner: “Onesti’s Wild West.”

After more than a month, the goal continues to be expanding upon such staples as gold panning, train rides, a Merry-Go-Round, history museum, and pony rides, as well as provide more amenities. The 25-acre site near Route 20 in Union has been operating since 1974, when original founders Larry and Helene Donley first swung the gates open. They retired last year, although their sons, Randy and Mike, continue to be involved.

“The Donley family still owns the buildings and the parcel, but my brother and I wanted to step back from it a bit,” said Mike Donley. “We have an auction and antique business that has taken on a life of its own. We entered into the partnership with Ron, who has brought a lot of enthusiasm and energy along with him. All the credit should go to him, so we renamed the park.”

Onesti is excited. “The idea is focusing more on the music and the entertainment. The Wild West was all about guns and gunfights and we’ll keep that as part of the equation but we want to focus on food options, basically moving from an amusement park to an entertainment venue. We’ve already moved the merry-go-round and built a small stage for music in the park. Another plan is to build a 2,000-seat area for music, with a show by summer’s end.”

The long-shuttered 200-seat restaurant area was immediately a focal point and re-christened as the Be Bop A Lula’s Rockabilly Café, presenting live music and food, all with an Americana décor.

The café had been a priority, not only to get it running with more of an “Elvis, Johnny Cash, Patsy Cline experience,” but a place to serve the food he has become associated with.

“I’ve got to serve my meatballs,” he said. “So, we have a Spaghetti Western Sunday, an Italian feat at reasonable prices with recipes that have been handed down through my family, and we show John Wayne movies.” 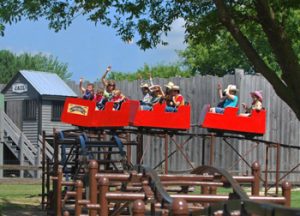 In its 45 years of existence, seemingly every young person in the Marengo-Union-Hampshire area has worked at least one summer in the theme park. Increasing the involvement of local youngsters and providing discounts for the local residents is in keeping with Onesti’s feeling that the park is a community property.

“We are so honored to be part of something that has affected so many lives and continue the Donley legacy,” he said.

Onesit’s zeal for entertainment can be traced back to a day-long event in 1976, at Cicero’s Hawthorne Racetrack.

“They had Yes with Patrick Moraz, Peter Frampton, when ‘Frampton Comes Alive’ was the top-selling record, and Lynyrd Skynyrd. I was 14 years old, and that was my first concert. It really pushed me into the business and gave me the mindset,” he said. “The cool dynamic of it is that I’ve become very good friends with every one of those bands, and we’ve presented them countless times at the Arcada Theater in St. Charles.”

Mike Donley, still an integral part of the theme park, was also a projectionist for Classic Cinema theaters. Onesti thinks that love of film helped him tie into amassing an outstanding collection of items associated with inventor Thomas Edison.

“My absolute favorite is the Thomas Edison memorabilia,” Onesti said. “The opportunity to expand on the Edison experience with statewide science fairs, live presentations, photographic elements, and those 1,099 patents which he obtained is amazing

“The antiques are all still here. Mike and Randy (Donley) are interesting individuals. Actually, a close second is the unbelievable blacksmith shop. The tools, the set-up, everything is authentic.”

Onesti also noted that the communities of Marengo and Union that have been “so welcoming and supportive in wanting us to succeed,” and thanked them…but with all his ventures and activities, when does he find time to sleep?

“Sleep is an overrated initiative,” he said. “I have a really good, capable staff, an understanding family, and a passion for what I do.”