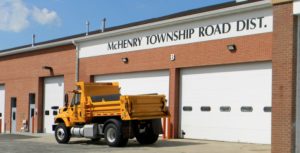 The McHenry Township Road District would come under the jurisdiction of the township proper, should voters approve a referendum question on the Nov. 6 ballot. (Photo by Gregory Harutunian/for Chronicle Media)

The McHenry Township Board moved forward in placing a referendum question before voters for the Nov. 6 general election, seeking to bring the township road district under its jurisdiction as an effort to consolidate the two entities, during a Feb. 13 special meeting.

Further roiling the waters are assertions that the effort is politically motivated by township trustee Bob Anderson in pursuing consolidation efforts of governmental agencies. The township board voted 3-2 to deny the road district assimilation question, during its regular Jan. 18 session. The swing vote was trustee Mike Rakestraw, who voted to affirm the resolution at the February meeting.

“One thing I would point out is that Mr. Rakestraw claimed to have changed his vote from the previous meeting, because the wording of this resolution was different … when actually they were identical,” said Jim Condon, the road district’s highway commissioner. “So, that is false. Based on that, I can only assume that this was politically motivated.”

The resolution authorizing the referendum question states: “Should the Road District of McHenry Township be abolished with all the rights, duties, assets, property, liabilities, obligations and responsibilities being assumed by the township of McHenry?” T

he document also outlines the township’s statutory license for the measure which passed into law last year.

Anderson, a township trustee, is a proponent of government consolidation and voted for the referendum question, as did trustee Bill Cunningham, at the January meeting. Adams, Rakestraw, and Wojewski voted to oppose the resolution at that session, and cited that no cost study evaluation had been completed.

“Consolidation is a big issue, and to my understanding, it has to be done responsibly,” said McHenry Township Assessor Mary Mahady. “The concern with this action, taken by the board, is that no cost analysis study has been undertaken. The financial benefits are not understood, and there has been no explanation behind the purpose of consolidation, at this time. A study would show what cost factors are involved.

“There were about 150 people at the (Feb. 13) meeting, and I think the main problem that concerned the residents was the lack of information being presented to make such a move,” she said.

Condon agreed, later saying, “I strongly feel there should be a fiscal impact study, prior to this being done, for the simple fact that we’ve been told too many times by politicians that they will save us tax dollars, and they never do. They (township) have yet to ask me one question about the bills that they are required to approve, the levy that they recently approved, and the budget that was in place, when they took the office.”

Mahady said the tax apportionment rate collected annually for the road district would remain the same, but pointed out that the monies would go directly to the township’s coffers, should the referendum be approved.

“The tax levy for that portion of the township road district will still be collected but it will come under the control of the township board,” she said. “They would decide how and when it is spent, and on what projects, or contracts. Road district employees are unsure how their jobs would be affected.”

Condon noted, “I’m on call 24 hours a day and put in about 40-45 hours per week, contingent upon when the snow flies, and when the sheriff calls for an emergency. Besides, I already have a business that I can go back to full-time, and walk away. It would also be more financially beneficial.”

Anderson and Adams were unavailable for comment, at press deadline.

The road district’s website lists its chief duties, among them: snowplow and apply ice control to all township roads; maintain and repair roads, shoulders and ditches; maintain and repair more than 900 warning and regulatory signs; install/maintain culverts and guardrails; stripe all main roads in township; remove trash, debris and dead animals from roadsides; provide all street lighting on township roads; issue permits for overweight and oversize vehicles; and attend all proposed subdivision plat review meetings for township.

“If they have these ideas to save money, why weren’t they brought up during their last eight months as trustees? I think it’s motivated by Bob Anderson, pushing consolidation like he has for the last 30 years,” Condon said. “It’s also Gov. Rauner, and state politicians, so they can say, ‘Well, at least we did something.’ They have yet to show one bit of evidence that consolidation, at the township level, will save any money.”

Should voters approve the referendum question, the effectuation date would begin in 2021.