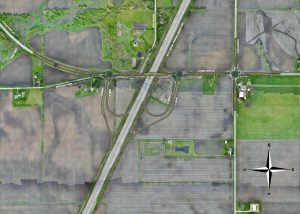 An aerial plat design rendering of the interchange, which gives McHenry County its first I-90 tollway access. (Courtesy of the McHenry County Division of Transportation)

A Dec. 10 morning event, which filled the Marengo City Council chambers, was held to announce the official grand opening date for the Route 23/I-90 Interchange and its completion. Inclement weather prevented finishing the project in October that now provides McHenry County with its first and only access to the Jane Addams Tollway.

The Dec. 23 official opening date will also mark the interchange being named for McHenry County Sheriff’s Deputy Jacob Keltner, who was slain earlier this year, as part of a federal contingent serving a warrant in Rockford. The state legislature approved the resolution and naming of the interchange, during session held in May.

“The thing that was repeatedly echoed from state, county, and local officials was the good intergovernmental cooperation required for the project to see fruition,” said Marengo City Administrator Josh Blakemore. “There was the same goal, the same mission … and it was to get this project done in a timely fashion.”

A statement issued Dec. 10 by the Illinois Tollway Authority, coinciding with the event, said, in part, “The $33.4 million Illinois Route 23 Interchange Project on the Jane Addams Memorial Tollway (I-90) provides a new, full-access interchange, the first direct interstate connection to I-90 constructed in McHenry County. Traffic projections estimate the new interchange will serve a total of about 4,800 vehicles daily.

“In conjunction with the project, local road improvements including construction of a roundabout intersection at Illinois Route 23 and Harmony Road will be completed in 2020. The Tollway project included funding from the City of Marengo, McHenry County and IDOT.”

Contacted later, Illinois Tollway Executive Director José Alvarez said, “The Illinois Route 23 Interchange project represents our commitment to smart transportation planning, our capacity to innovate and our ability to improve travel. It also sets the stage for desirable commercial and industrial development and job growth along the Illinois Route 23 corridor and beyond.”

The project’s genesis began with a December 2012 joint meeting between Marengo’s City Council and its Planning and Zoning Commission to discuss a potential framework for the project. At the time, Huntley had undertaken to upgrade its Route 47 connection to I-90, from a partial to full interchange. The model used for funding and implementation were cited for possible applicability to a Route 23 access.

The Marengo city council unanimously voted to approve the startup agreement for the design study, which was reimbursed by MCHDOT, as well as executing the intergovernmental agreement between the city and county for the project, during its April 13, 2015 meeting. It also completed the “contiguity,” which meant annexing the property leading to the interchange. 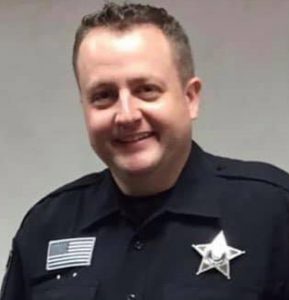 The Dec. 23 official opening date will mark the interchange being named for McHenry County Sheriff’s Deputy Jacob Keltner, who was slain earlier this year, as part of a federal contingent serving a warrant in Rockford.

The McHenry County Board’s finance and audit committee approved a memorandum of understanding, along with an intergovernmental agreement, to propel the anticipated construction of an interchange for I-90 at its junction with Route 23 near Marengo. The actions came with similar 6-0 votes, and one absent, during the Aug. 25, 2016 meeting.

The memorandum of understanding and intergovernmental agreement tied the Illinois Tollway Authority Board, the state of Illinois Department of Transportation, McHenry County Division of Transportation, and the city of Marengo together on the long-awaited project. The intention was to build a three-lane deck, and the bridge piers, along with a five-lane bridge deck for the interchange. Roundabouts for inbound and outbound interchange access were selected over traffic signals.

By August 2017, construction was in full action with the widening of the Route 23 Bridge over I-90. With its completion, retail and industrial development is expected at the interchange that will provide Marengo with a larger revenue base.

In the ITA statement, Marengo Mayor John Koziol said, “We see the new interchange as a major driver for economic development in the City of Marengo, and McHenry County, and we want to let everyone know we are open for business.”