An artist conception shows how the proposed second Jewel-Osco store in Huntley would appear. The structure is targeted for 62,794 square feet. (Photo courtesy of the Village of Huntley)

The Village Board of Huntley unanimously approved the referral of a site plan and building elevations map to the village’s Plan Commission that would clear the way for a second Jewel-Osco store within the municipality, during its Oct. 12 regular session.

The approximately 62,794-square-foot structure is platted for construction near the intersection at Route 47 and Reed Road, and proximal to the Huntley Del Webb’s Sun City retirement community.

An estimated $17 million cost has been floated, along with an additional $1.5 million for renovations and upgrades at the current Jewel-Osco store location at 13200 Village Green Drive. The new facility has amenities such as a Starbucks Coffee, an atrium seating area, a pharmacy with a drive through, and a café with hot food items. The Des Plaines-based firm of Camburas and Theodore, Ltd. completed the architectural renderings of the structure. 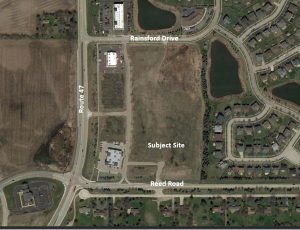 The aerial view depicts the location of the proposed Jewel-Osco store at the intersection of Route 47 and Reed Road. (Photo courtesy of the Village of Huntley)

A presentation by Dave Hene, a senior real estate manager for Jewel Osco/Albertson’s, Inc., took place during the Oct. 5 Committee of the Whole meeting, and explained how the 17.29 acres of the Rosati’s Resubdivision would be branched for retail outlots. A preliminary planned unit development (PUD), and zoning for a B-3 shopping center business district, was approved in 2008. It was also noted that Lot 5 has already received a special use permit and PUD for the multi-tenant retail center, and includes a Dunkin’ Donuts.

“This is still in the discussion stage, and the Village Board formally looked at the proposal,” said Huntley Village Manager Dave Johnson. “The concept, the preliminaries, and the projected tax revenues are all still in process. For any project to move forward, our plan commission has to review and make the recommendations, before it comes back to the board.”

During the Oct. 12 board session, plan commission members were given the authorization to begin the formal development review process, and enter into negotiations for a business development agreement. “This is all still in process, and the board has not formally approved the project,” said Johnson.

The concept plan outlines two lots, of 9.11 and 8.18 acres respectively, subdivided from the original 17.29 acres, with the store constructed on the southern lot closest to Reed Road. Site plan adjustments showed barrier landscape islands placed along the north-south access lot were not consistent with PUD guidelines, yet preferred by the company for traffic flow. The drive aisle of the pharmacy lanes is envisaged as enlarged beyond its 22-foot width.

The plans also state that parking removed from “the drive aisle that connects the current full access to the site with the north-south access road, across from the entrance to Walgreens. The minimum parking requirement for retail sites is four parking spaces per 1,000 square feet, and translates to 251 spaces. Jewel proposes 402 stalls, with 10-foot by 19-foot dimensions, and incorporates nine accessible and loading spaces.

Landscaping considerations will add 18 trees along the Reed Road frontage, shrubs, and ornamental grasses with perennial plants. The request for the eastern property line, which abuts with the Covington subdivision, is to plant more trees and evergreens as a buffer with the extant berm remaining undisturbed.

A total of eight Jewel-Osco sites are currently in McHenry County with two located in Algonquin, and one each in Crystal Lake, Cary, McHenry, Spring Grove, Woodstock, and Huntley.