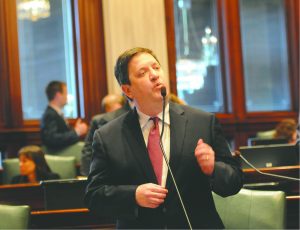 State Rep. David McSweeney, shown here in this file photo, has sponsored legislation that would give voters in McHenry County a greater ability to eliminate township governments in the county. McSweeney, a Republican from Barrington Hills, calls townships “unnecessary” units of government and said their elimination would save taxpayers money. (davidmcsweeney.org photo)

SPRINGFIELD — McHenry County is a 610-square-mile area on the Wisconsin border, about 90 minutes from downtown Chicago. Its 300,000 residents live in urban centers — such as Crystal Lake and Woodstock, the seat of government — and rural communities.

Like most of Illinois, the county has a system of government comprised of overlapping layers of townships and districts, each of which can levy taxes. They are responsible for everything from the daily operations of towns, to plowing roads in the winter or killing mosquitoes in the summer.

McHenry County is the sole subject of legislation giving its voters an option to dissolve township government. It is an effort by a state lawmaker to cut residents’ property taxes by eliminating what he calls “unnecessary” levels of government.

If the experiment goes well there, in the sixth most populous county in the state, Rep. David McSweeney said the next step would be to give the rest of Illinois the ability to get rid of township governments.

“That’s what I’m hoping,” the Barrington Hills Republican said. “I want to show that consolidating government works in McHenry County. I want this go to statewide — to allow consolidation to be considered by voters across Illinois.”

But the measure is contentious even in McHenry county, where some officials expressed frustration McSweeney did not ask if such a provision was needed. Others said they worry what the impacts would be if McSweeney’s bill becomes law — there has not been a recent study providing a clear analysis.

There are some supporters, who said residents should be able to decide what form their government takes. And Jack Franks, the County Board chairman and a former state representative, said townships are an outdated form of representation. It is time for something different, he said.

The House approved McSweeney’s bill earlier this month. It needs the Senate’s approval and governor’s signature before taking effect. But if successful, members of the McHenry County Board will probably have to learn how to do more, with less.

WHAT’S IN THE PROPOSED LEGISLATION

House Bill 348 gives residents the option to dissolve their township, transferring the governmental operations, employees and property to McHenry County.

Illinoisans already have this ability, but the threshold for a grassroots petition to get the choice on a ballot would be cut in half under McSweeney’s bill. A township board could also submit a proposition to voters.

And, McSweeney added to the bill a promise that property taxes to cover services currently handled by the township would drop by at least 10 percent. It includes a mandate that all funds associated with an eliminated level of government must be applied by McHenry County toward only the geographical area of that dissolved township.

According to the state comptroller’s website, there are more than 8,500 local government units in Illinois — townships comprise 1,428 of those. Seventeen of them are in McHenry County.

Townships are essentially the closest level of government to citizens and are required by law to provide three services: general assistance to the poor or destitute, property assessment and road maintenance. Typically, they provide more than this.

About 80 of the state’s 102 counties have townships, and consolidating them is a perennial issue in the General Assembly.

“My goal is to reduce the number of governmental bodies — it’s one of the reasons our property taxes are so high,” McSweeney said. “Consolidation, I think, is the key to reducing property taxes and administrative fees.”

The legislation passed the House with bipartisan support, and bipartisan opposition. 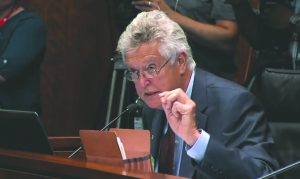 State Rep. Steve Reick, shown here in this file photo, opposed legislation that would give voters the ability to eliminate township governments in McHenry County, which he serves. “I believe in cutting property taxes, but the fact is, this bill does not do that,” Reick (R-Woodstock), said. (ilga.gov photo)

“There are hypocrites on the Republican side who support lower property taxes but not consolidation of unnecessary units of government. It’s a real eye-opener,” McSweeney said. “I’m glad to have bipartisan support, though.”

His Republican colleague, Rep. Steven Reick, disagreed with that assessment. From Woodstock, Reick is the only representative whose district falls completely within the boundaries of McHenry County. He voted against the legislation.

“If I’m a hypocrite, I don’t know where that’s coming from,” Reick said. “I believe in cutting property taxes, but the fact is, this bill does not do that.”

Whether McSweeney’s legislation will lower property taxes in McHenry County, what will happen to the services townships provide, and how to pose the potential option to voters are sources of debate between some members of the County Board.

There has not been a comprehensive analysis to study the effect of eliminating townships, said Kurt Thurmaier, chair of the Department of Public Administration at Northern Illinois University.

That leaves board members with more questions than answers.

One, Carolyn Schofield, said the board is not prepared for this bill becoming law because of the lack of comprehensive data.

“We’re not opposed to the concept of consolidation, but we haven’t seen any tax savings. There hasn’t been a study,” she said. “It’s almost as if the Legislature is forcing this without knowing what it would do, without thinking it through.”

Townships often have part-time, nonunion employees, for example, so labor costs are less than what a county would pay, Schofield said.

But board member Michael Vijuk said he thinks there would be property tax savings for McHenry County residents.

“Townships don’t tax at very high rates, but any savings that a constituent can have is more money in their pocket to spend on things like education or food or utilities, and I think that’s really important for the community as a whole, he said.”

Savings could be realized by the county choosing to sell construction or snow plowing equipment it does not need. Employers would also likely be let go, McSweeney said,

especially administrators whose salaries are usually among the highest in a township.

The most recent study in McHenry County occurred in 1994, when there was a ballot initiative to eliminate all townships. At the time, the county commissioned an impacts analysis.

“We have stated that hypothetically, the cost of McHenry County Government could rise by at least some $9 million annually, with additional first year start-up costs in excess of $6 million,” that report read.

But much has changed since 1994, and McSweeney’s bill differs from the ballot initiative of 25 years ago.

County officials are also unclear how services provided by townships would be changed, if at all.

Schofield said dissolving townships, a first level of government that’s closest to the people – has not been closely studied.

One benefit townships provide that McHenry County does not is general assistance. Schofield said she is unaware of any department in the county that can take on that role should a township dissolve.

Townships are also required by law to assess property value, which determines a homeowner’s property tax bill. The county supervisor acts as a check on an assessor’s work — if someone disagrees with a rate an assessor’s office sets, they can appeal it to the county office.

Mary Mahady is the assessor for McHenry Township, the second largest in the county. She said she has a staff of seven full-time employees to manage daily duties — updating property values, doing on-site inspections of properties, handling permits and checking on sales, to name a few.

“My fear of this is that, especially the way the bill is written, assessments are just like an afterthought,” Mahady said. “They’re the heartbeat of the property tax system, and if they’re not done correctly and fairly, the tax burden is not distributed fairly.”

Even if the county makes adjustments to add an assessor’s office, she said, she is unsure how effective it will be. Mahady’s office is in the township and easily accessible to residents.

“The people who would suffer the most are the people who are least able to afford to have more property taxes levied on them,” she said.

The piece of McSweeney’s legislation automatically giving voters at least a 10 percent property tax cut is a red flag for Thurmaier, too. Because McSweeney’s bill passes a dissolved township’s responsibilities to McHenry County, the property tax break translates to less money for the county to provide the same services as the township.

“I’ve never heard a county say, ‘Yes, we can take on all those responsibilities at a lesser cost,’” Turmaier said.

Many on the County Board said ultimately, the voters should decide.

“If the bill goes through, it’s a good idea for constituents to say how they want to have their government developed and modified,” Vijuk said. “It’s more important than just having five or six people on a township board, or 24 people on a county board, or even legislators deciding the issue. There’s a collective intelligence in so many people in a community voting on the issue.”

But Mahady said before the question is posed to McHenry County residents, officials must clearly explain what “consolidation” means.

“I think politicians like to say ‘consolidate’ because voters would think their taxes will be reduced, but there is no cost study to say that and nothing from the county to say that,” she said. “Consolidation means something different to everyone you ask, and the bill isn’t well-written, well-thought or well-explained.”

“I’m so tired of hearing insults slinged at our voters. I trust the voters,” he said. “They know what they’re doing. To insinuate that somehow they don’t have enough information to make a decision is really insulting.”

Either way, Schofield said, she does not think citizens will vote to dissolve townships once given all information.

“If you explain all the details and the reality of the situation, I don’t see anyone asking for the option to consolidate,” she said. “It doesn’t necessarily save them money. Townships are such a small portion of their tax bill — they might save maybe $40.”

The McHenry County Board recently unanimously approved a resolution objecting to McSweeney’s bill because it would not be applied statewide.

“If it’s such a good idea, why not apply it to the whole state? Why should McHenry County be treated as special? I think it’s a special place, but it should not be used as a guinea pig,” Mahady said.

Franks did not vote on the resolution. He said McSweeney’s approach — using McHenry County as a “laboratory” — is correct because “someone has to be first — it ought to be us.”

He served in the General Assembly for almost two decades and was instrumental in writing the current law allowing for units of government to consolidate.

“I’ve written most of the consolidation laws in Illinois. If anyone is going to do this, I think I know how,” Franks said.

Townships, he said, are “a vestige of the past.” Dissolving them might not solve the problem of high property taxes in Illinois, but it can be a start.

“And if it doesn’t work, we’ll try something else,” Franks said.

The bill’s Senate sponsor is Democrat Terry Link, from Vernon Hills. He did not respond to multiple requests for comment, but McSweeney said he is confident Link will be successful in gaining Senate passage.

Reick said if that is the case — if McSweeney’s legislation successfully passes the Senate and the governor signs it into law — McSweeney should be prepared to speak to the residents of McHenry County.

“I don’t know what David McSweeney’s agenda is, and I don’t care, but I hope he has the strength of character to stand in front of the same people he’s telling now their property taxes are going to go down, and explain why that hasn’t happened and in fact, why they’ve probably gone up,” Reick said.

The Northwest Herald in Crystal Lake contributed to this story.