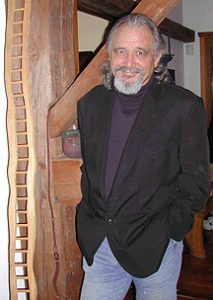 Author, and storyteller Jim May helped organize the Illinois Storytelling festival in Spring Grove. (Photo courtesy of Jim May)

In 2002, by invitation, the 19th annual Illinois Storytelling Festival brought Lisa Derman to its annual summer evening event held in the Village of Spring Grove.

The 75-year-old former World War II resistance fighter in ghettos, a holocaust survivor, and former president of the Holocaust Memorial Foundation of Illinois definitely had a story to tell.

“The time will come, when you will have to stand up, and be counted (against injustice), and do what’s right,” said Derman. “I will not be here much longer, and this story must go on.”

Hebron-based storyteller and author, Jim May, recalled the words, and had said that after 20 minutes of speaking, she handed her microphone to her husband, Aron, then lowered her head down onto her chest, and quietly passed away, from heart failure. The impact was shattering, as her prophetic words rang over the grounds.

“It was in mid-story … she lowered her head, and passed away,” May said. “Harold Rail, of Afterglow Productions, and I, edited the tape. A copy was given to every McHenry County middle school at the time with help from the superintendent. This is a powerful story and history. Spring Grove Park has a burr oak tree planted in her memory, since it’s most representative of surviving the prairie fires and native to the area.”

Derman’s life and words immediately had a far-reaching impact, not only for those in attendance, but the community at-large and around the country. She was committed to telling her story about watching family members killed, being a teenage resistance fighter, escaping the Holocaust in her village via train, and living in three ghetto enclosures. She also worked to expand the Illinois Holocaust Museum in Skokie to include the stories of others.

May, the festival’s longtime organizer, helped spearhead the movement the effort to build and erect a monument at the park site, entirely through donations. He made a presentation to the Spring Grove Village Board in July 2011 to gain approval, and with others, the project was shepherded along. Artist Nancy Wicker designed a 23-inch diameter bas relief plaque depicting Derman, and her sisters, affixed to a 22-foot diameter spire base. 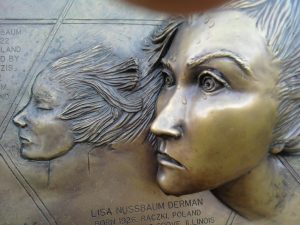 “We need to keep this story alive, which is our purpose here at Illinois Storytelling, Inc. and we intend to continue,” said May.

More than 16 years later, the storytelling festival now thrives at other venues leaving a history of remarkable people that enthralled audiences at Spring Grove Park. Most people driving now along the access road onto the grounds, see the rock spire standing off in a cove. They see the circular plaque affixed to it, with the side profile of a woman’s face jutting out. Few stop to read the small print that identifies the face as Derman’s, or read the inscription, “Never Again,” followed by a short history of her life.

Even more, it is a monument to the Holocaust survivors of Jewish, Armenian, Polish, Lithuanian and many other ethnic groups, and possibly the only such tribute in all of McHenry County. For Derman, it was all about remembrance and recounting a life.

“I’d like to update … we are planning to install a ‘meditation bench’ this summer,” said May. “The event will include a storytelling program as well, emphasizing stories of peace, healing, and compassion. Also, we are working to create the Woodstock Opera House as a national destination for the best in storytelling, like we did in Spring Grove.”

The park, with its open grounds located at 2102 Main St., was a perfect home for the midsummer weekend Illinois Storytelling Festival, beginning in 1984, and hosted Jackie Torrance, Art Thieme, and the Tuskegee Airmen, among other nationally known storytellers. The popular Saturday evening ghost stories, “after all the kids are asleep,” took on its own life in landing at Waukegan’s Genesee Theatre, each Halloween. 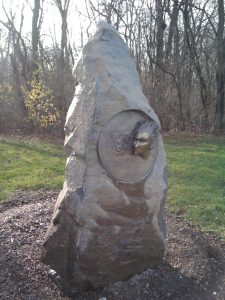 The sculpture depicting Lisa Derman and her sisters is set not far from where she died, during the 2002 Illinois Storytelling Festival. (Photo by Gregory Harutunian/for Chronicle Media)

The Stage Left Café at 125 W. Van Buren St. in Woodstock, is nestled next to the opera house, and features storytelling events once a month, as well as an eclectic mix of other programs.

“We’ve had ongoing storytelling there, at the Stage Left, on a monthly basis, for some years,” said May. “I would ask everyone to stay tuned for a Storytelling Event in the Spring Grove Village Park.”

May spends his weekends with performances at various sites, and leaves the weekdays for schools. “Humor is a great component to teach with, and it’s different everywhere too. I made three trips to Ireland, before I could get any of the elders to tell stories that made them laugh.”