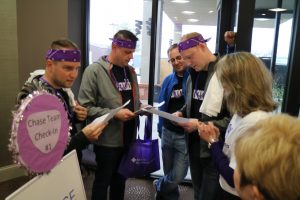 One of the 40 teams who participated in the Chase for Champions event checks in at the Bloomington DoubleTree Hotel and Conference Center on April 14. (Photo courtesy of Advocate BroMenn)

“We had 40 teams ‘chasing’ throughout Bloomington-Normal and over 700 in attendance at the recognition dinner,” said Advocate BroMenn Medical Center President Colleen Kannaday. “It was a huge success for Advocate BroMenn as well as for our community,” she said.

The Chase, held on April 14, netted approximately $102,000, the highest amount ever raised at the event, which has been held every other year since 2014.

All proceeds will remain local, with the bulk of the funds going to create a state-of-the-art Simulation Lab for Advocate BroMenn’s Acute Rehab Unit. The lab will simulate a variety of real-life scenarios to help recovering stroke and traumatic brain injury patients. Advocate BroMenn has the only inpatient rehabilitation unit in McLean County.

A portion of the proceeds will also go to fund educational scholarships for the four public safety personnel announced that night as the event’s Champions.

McLean County Sheriff’s deputies Landon Cuba and Alex Freshour. Cuba and Freshour were recognized for their quick and professional action following a double homicide case last year. They were lauded for responding to and controlling a dangerous and chaotic scene with bravery and efficiency.

Metcom telecommunicators Benjamin Over and Nicole Snodgrass. Over successfully intervened in a situation where a local woman called 9-1-1 to report that her daughter was planning to commit suicide by jumping off San Francisco’s Golden Gate Bridge. Over helped track down the daughter’s whereabouts and assisted San Francisco police in locating her before she harmed herself.

Snodgrass received a 911 call from a stabbing victim who was struggling to provide information. Through her persistent, direct questioning, Snodgrass was able to get the details from the caller within 30 seconds and dispatched assistance. 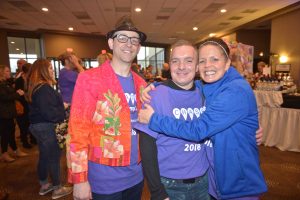 By keeping the caller conscious and talking, she obtained crucial information for quick, effective response. The suspect was quickly apprehended due to her efficient handling of the call.

Cuba, Freshour, Over and Snodgrass were chosen from a field of 13 nominees.

The event also collected nearly 150 stuffed animals for its “Bears for the Brave” initiative. The plush toys will be given to public safety officers, who will use them to provide comfort to children in stressful situations.

“We’re so grateful to our event chairs, Cheryl Hussain and Courtney Zell, and the over 150 volunteers who made this event possible,” said Sue Seibring, manager of Volunteer Services at Advocate BroMenn Medical Center.