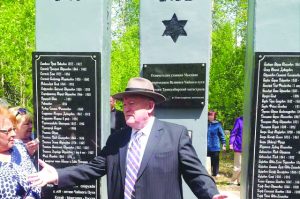 Vladimir Rott survived the Stalinist persecutions in the Soviet Union, and the Nazi invasion during World War II.

His incredible life’s journey will be the subject of the talk “Surviving Repression:  A Personal Account of Life under Stalinism and Nazi Occupation” at 4 p.m. on Thursday, March 28, in the University Galleries.

As the Rott family were Jewish Hungarian immigrants in the Soviet Union, Rott’s father was labeled an “enemy of the state” and imprisoned under the regime of Joseph Stalin. They faced double persecution under the Nazi invasion and narrowly escaped extermination.

In 1974, he defected from the Soviet Union while visiting extended family in Canada. He still resides with his family in Toronto, writing books, traveling the world, and building monuments to preserve ancestral memories in Hungary and Siberia.