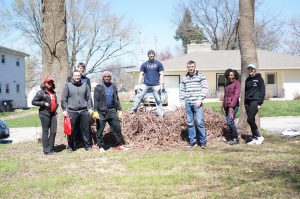 Because of the timing of the event, Bring It Back to Normal has “a spring-cleaning vibe,” with many of the projects entail raking leaves, cleaning debris that gathered over the winter. (Photo courtesy of ISU)

It started with a simple mission, and a few dozen participants. But in the decade since, it has swelled into an annual change-of-seasons event that has bridged two groups of residents within Normal and has been touted as breaking down barriers.

In the years since the first gathering in 2008, Illinois State University’s service-themed Bring It Back to Normal effort has notched 1,500 volunteer hours and more than 4,000 hours of community service.

“It’s provided us with an opportunity to get a large number of students out into Normal,” said Paige Buschman, who plays a pivotal role in coordinating community service projects at Illinois State University’s Center for Community Engagement and Service Learning.

As with most so-called “college towns,” Normal faces the dubious distinction of hosting two groups of people — the permanent residents who live in the broader community and the ISU students who might feel tempted to live largely within the campus’ insular confines.

Bring it Back to Normal, which was inspired by an enormously popular program hatched out of Texas A&M University in the early 1980s, is designed to break down the invisible walls that sometimes are built between the two populations.

While service learning is at the heart of the program, Buschman said the work continues beyond the half-day’s worth of activities.

“We want (ISU students) to know you are a part of this community,” she said. “We’ve been able to have some very positive interactions.”

Once the actual physical work is done, Buschman said students take time to process the activity and its significance.

“It’s not just showing up, doing the work and going home,” Buschman said. “We encourage (the students) to give their thoughts and reflections of it. We call this a reflection activity. It’s about the impact of service.”

When it returns for its 11th installment from 9 a.m. to 1 p.m. Saturday, April 14, ISU students taking part in this year’s Bring It Back to Normal activities will visit one of nearly 30 sites. 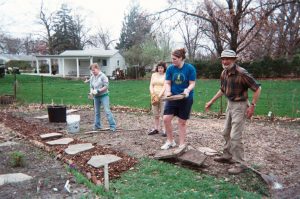 Illinois State University students taking part in this year’s Bring It Back to Normal activities will visit nearly 30 sites in the community to help residents. (Photo courtesy of ISU)

When it peaked a few years ago, 335 ISU students took part in activities — a large bump from the 30 students participating during the inaugural gathering in 2008. Although the numbers remain fluid, Buschman said she anticipates at least several hundred attendees this year.

Most of the work at the host sites occurs through collaboration with partnerships forged with organizations across the Twin Cities. Most of the work takes place within Normal, but as the effort has grown in recent years, projects have also stretched into Bloomington.

Because of the timing of the event, Buschman said Bring It Back to Normal has “a spring-cleaning vibe,” meaning many of the projects entail raking leaves, cleaning debris that gathered over the winter and other outdoor tasks that are common as winter’s thaw gives way to spring conditions.

But Buschman said activities run the gamut, and ISU students are ready and willing to take on any activity not deemed dangerous or hazardous.

Some of the most memorable and unique tasks students have assisted in over the years included polishing a large volume of silver and cleaning windows — 52 of them — on a home that welcomes in a significant amount of natural lighting.

One of the most visible examples of Bring It Back to Normal’s success, Buschman said, is best represented by the feedback from persons on both sides of the equation.

“Volunteers speak very well of it, but there’s also been a lot of organizations coming back, year after year,” Buschman said. “There’s now a history behind this, and we want to celebrate its success. It’s turned out to be a great program.”

Other ways of giving back this spring: Bloomington and Normal municipal officials and organizations have officially designated Saturday, April 14 to Sunday, April 22 as a period for annual community wide cleanup activities.

Several organizations, including the Bloomington and Normal beautification committees, are spearheading the activities. Details on this year’s communitywide cleanup activities are available at www.ecologyactioncenter.org/event/bn-spring-clean-up-week/.

—-  Back to Normal service activity bonds ISU and community —-