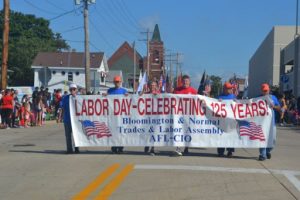 The Bloomington Labor Day Parade dates back to 1891, three years before the day became a national holiday. (Photo courtesy of Bloomington Normal Trades)

Due to COVID 19 restrictions and to help ensure community health, this year’s Bloomington Labor Day Parade is canceled.

“The parade has always been the highlight of our year’s labor activities, an opportunity to salute the everyday working men and women who keep our community vibrant,” said Ronn Morehead, president of the Bloomington & Normal Trades & Labor Assembly (AFL-CIO).  “It was not an easy decision, but the last thing we want in the current health situation is to have large crowds gathering.”

This year’s Parade theme was to be “150 Years of Struggle: Your Right to Vote.”  The parade was to highlight the 150th anniversary of the 15th Constitutional Amendment, which extended voting rights to African-American males in 1870, and the 1920 passage of the 19th Amendment, which gave women the right to vote.

The Bloomington Labor Day Parade dates to 1891; Labor Day became a federal holiday in 1894.  The Bloomington parade tradition ended in 1927 and was revived again in 1977.  It has only missed one year since 1977 and that was because of a severe thunderstorm.

The Trades & Labor is exploring social media and other options to mark the holiday and give voice to workers’ concerns.

The Bloomington & Normal Trades & Labor Assembly is the American Federation of Labor – Congress of Industrial Organizations (AFL-CIO) central labor council for unions in McLean, Livingston, DeWitt and Lincoln counties. More than 31 local unions are affiliated with the Assembly, which is over a century old.