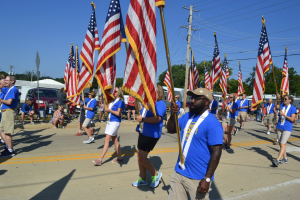 This year’s parade theme is “Vote Yes: Workers’ Rights Amendment.”  The November election will feature a referendum on a proposed constitutional amendment enshrining workers’ rights to organize a union and bargain collectively.

This year’s WJBC “Laborer of the Year” is a couple, Greg and Mary Zappa.  Greg is retired, a 48-year Laborers Local 362 member, where he worked construction.  Mary is a retired nurse.  The two are regular volunteers with multiple activities.  This past Saturday they both donated blood at the Laborers Local 362 drive.  They assist together with Tinervin Foundation food bank activities and have volunteered at Special Olympics, the Salvation Army and multiple other local charities.

“With two you get one,” said John Penn, Midwest Region Laborers International Union of North America (LIUNA) regional manager and a LIUNA vice-president.  “Greg and Mary are both the first to volunteer, no questions asked and with a ready to serve attitude.  They bring a great attitude and not only volunteer, but their good nature makes the event enjoyable for those around them.  They certainly deserve this honor.” 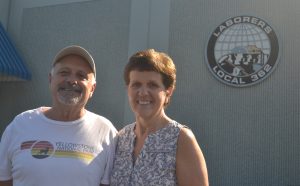 WJBC Laborer of the Year recipients Greg and Mary Zappa.

Besides working at ISU and leading his union, Carver volunteers as a DJ at celebration of life services and parties, plus plays Santa at Christmas. This past spring, Carver led his local’s contract negotiations with ISU.  “Chuck is not only devoted to his own members but to other union workers and the labor movement,” said Trades & Labor President Adam Heenan.  “Chuck is 100 percent union all of the time.”

Over 70 units are registered for the parade.  The parade will begin at Front and Lee streets at 10 a.m., proceeding south on Lee Street to Wood Street, and then west on Wood Street to Miller Park.

The Bloomington & Normal Trades & Labor Assembly is the local AFL-CIO central labor council, where 31 local unions have convened for over a century. The Assembly’s jurisdiction includes McLean, Livingston, Logan and DeWitt counties.