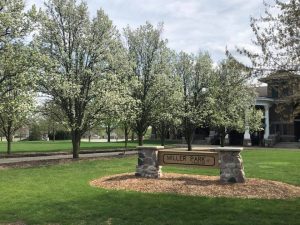 Miller Park is in many ways the centerpiece of the Bloomington park deparment.

Although its true origins stretch back much further, the current iteration of an entity devoted to overseeing parks, recreation and cultural amenities in Bloomington is in the midst of its golden anniversary.

In 1968, what today is known as the Bloomington Parks, Recreation and Cultural Arts Department was formally established in the hopes of bringing the small number of green spaces together under the oversight of one umbrella organization.

“There were just a few parks at the time, and it was just kind of smattering across the city,” said Debbie Bohannon, who serves as the office manager of the department. Bohannon has been delving into the BPRCA’s history, in preparation for a celebratory event planned for September.

With backing from the then-City Council, Mayor Robert McGraw in the mid-1960s began advocating for an organized parks system in the community in the hopes of building off the strength of some of the city’s legacy green spaces.

Miller Park and its longtime accompanying zoo, each with roots stretching back to the late 1800s, is among the venerable spots that far predate the actual department’s founding.

“There was a movement for a recreation referendum,” Bohannon said of McGraw’s overtures. The referendum was passed in November 1966, and a dedicated funding source through tax dollars was created as a result of its success. 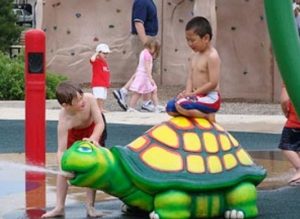 The splash pad at McGraw Park in Bloomington. The park was named after Mayor Robert McGraw who in the mid-1960s led the way for developing an organized parks system in the city. (Photo courtesy of visitbn.org)

As with most organizations reaching a half-century milestone, the Bloomington Parks, Recreation and Cultural Arts Department has gone through an evolution in the decades since its founding.

The department’s name, for one, has grown as the number of locales under its oversight has followed a similar trajectory. The “cultural arts” portion of the name was added, for instance, in 2009.

As the economic recession was reaching its height, the future of the Bloomington Center for the Performing Arts came into question. The decision at the time was made for the city to take oversight of the BCPA and fold it into the department’s auspices.

But there have been other milestones in the department’s history, including a collaborative effort with the Constitution Trail, which began nearly 30 years ago.

“It didn’t start out very big, but it has evolved into what it is today,” Bohannon said.

Another abundantly positive time in the department’s history, Bohannon said, was throughout the 1990s, when the Illinois Department of Natural Resources was providing matching grants to establish parks.

“That was huge because it helped our parks system out quite a bit,” Bohannon said.

The establishment of the Pepsi Ice Center, providing a new amenity to the region, was another watershed moment for the department, Bohannon said. 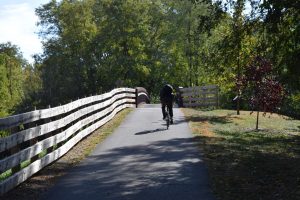 Parks and cultural arts, naturally, are two of the department’s three components. Bohannon said recreation offerings also have evolved in the past five decades.

In its current form, Bohannon said the department’s offerings give local youth a taste of a wide range of activities and skills at an introductory level.

“We help them go on to bigger and better things,” she said. “You’d be hard pressed to find something your child wouldn’t be interested in.”

For that matter, Bohannon said she challenges adults to try and find a program they would not be interested in taking.

As the evolution has continued, the BPRCA has partnered with Normal’s counterpart department for programs benefiting persons with intellectual disabilities by way of the Special Olympics organization.

Today, the department has more than three-dozen sites under its auspices. While officials are taking time to commemorate the milestone, attention also is being placed on the future.

A more than 20-year-old comprehensive plan for the city’s green space is under review and subject to a refresh.

“It’s a great guide for what we could do in the future,” said Erin Mangian Shannon, the department’s marketing manager.

Residents with images depicting BPRCA’s 50-year history are invited to share their archives with department staffers for a photo contest. Photos can be of people, parks, facilities or spaces, either from the distant or more recent past. The deadline for entries is Aug. 1.

The winning photo will be featured on the cover of the department’s winter/spring 2019 program guide. Select photos also will be shared on social media and during a curated art show on the anniversary at Miller Park on Sept. 29.