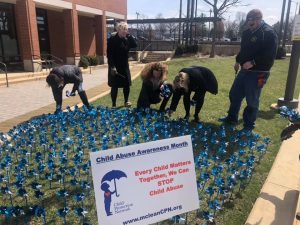 Staff with the Child Protection Network in April planted pinwheels outside the McLean County Children’s Advocacy Center representing for each child getting service from the CAC/CASA in 2018 within the community. (Photo courtesy of CPN)

It’s an uncomfortable, jarring topic that all too often runs the risk of being swept under the figurative rug and not discussed.

But the newest leader of a nearly 30-year-old tri-county organization aimed at preventing and treating child abuse and neglect says plans are in motion to increase the group’s visibility in the road ahead in the hopes of furthering the mission.

Since August 1990, the Child Protection Network — or, as it is sometimes known, CPN — has been advocating for the youngest residents in McLean, Livingston and DeWitt counties.

“We’ve been kind of quiet in the community the past three years,” said Samantha Stevenson, who has served as CPN’s director of development for the past year-and-a-half. “But I think we’re starting to get some new momentum.”

Because of the sensitive nature of the issues Bloomington-based CPN rallies around, Stevenson said the organization and its goals can, at times, fly under the radar. But she said organizations such as CPN are necessary.

“The unfortunate reality is child abuse exists,” she said. “If we didn’t have nonprofits to support the kiddoes going through these situations, I think it would perpetuate at an even greater cycle.”

At its core, CPN provides financial resources for the programs and support services related to the prevention and treatment of child abuse and neglect.

The organization has a relationship with Children’s Advocacy Centers in the three counties. The partnership is designed to provide the resources needed to investigate crimes against children and provide the support for innocent family members. 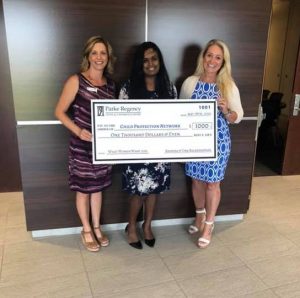 The Child Protection Network was the recipient this month of a $1,000 gift from the Parke Hotel’s What Women Want Expo. There were over 600 attendees and CPN was voted out of six not-for-profit organizations to receive the donation. (Photo courtesy of CPN)

“We’re very passionate about what we do,” Stevenson said. “We work very diligently with the staff at the CAC. They work very hard to ensure there is justice.”

As with most nonprofits, Stevenson said CPN relies heavily on volunteers to ensure its mission is carried out across Central Illinois.

Volunteers are needed in a variety of areas, Stevenson said. One such area is through the Court Appointed Special Advocate, or CASA, program. Judges appoint people to serve as CASA volunteers who watch over or advocate for abused or neglected children.

Other opportunities to give of one’s time and talent is through service as a CPN board member. Stevenson said the members serving on the board help guide the organization’s vision and future.

“We’re always in need of volunteers,” she said. “I really believe that together, as a community, we can fight against child abuse.”

As she continues settling into her role, Stevenson said a personal goal is to increase the number of community-related activities CPN initiates. One such activity on the horizon is a fundraiser, Over the Ledge, set for Friday, Oct. 11, and Saturday, Oct. 12, at the Bloomington-Normal Marriott Hotel and Conference Center. A goal has been set to raise $100,000.

Over the Edge includes collaboration with a number of like-minded nonprofits, Stevenson said, including the local Boys and Girls Club. Participants who are able to obtain $1,000 in donated pledges will be able to rappel down the side off the hotel. 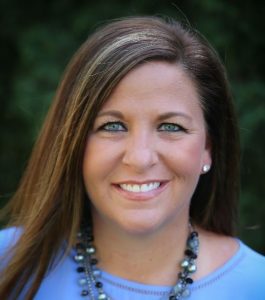 “This is something a little different. It’s outside the box,” Stevenson said. “But it’s for everybody. We think it’s important to put some ‘fun’ in fundraising.”

As CPN seeks to grow and broaden its scope, the group’s overarching mission will remain the same now as it was nearly three decades ago, Stevenson said.

“This is all about the kids — and giving them hope,” she said. “For those who have endured child abuse or neglect, this doesn’t have to be the end-all, be-all. It doesn’t have to define them.”

For details on CPN and its upcoming activities, visit the group’s website, www.mcleancpn.org, or its Facebook page, www.facebook.com/mcleancpn.

Stewards of Children is a three-hour training program that teaches adults how to prevent, recognize, and react responsibly to child sexual abuse. Program will be from 4 to 7 p.m. on Tuesday, Sept. 24 at the McLean County Health Department, 200 W. Front St., Bloomington.