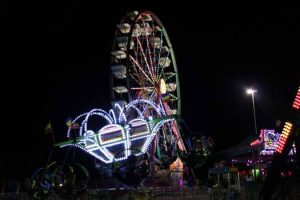 This intermingled philosophy, in a nutshell, describes Mike Swartz’s philosophy in determining what goes into the McLean County Fair each year. When the five-day extravaganza returns Wednesday, Aug. 2, visitors will be greeted to a delicate mix of the old and the new.

The McLean County 4-H and the University of Illinois Extension, of which 4-H is part, have long been at the heart of the local fair, held on the McLean County Fairgrounds at 1106 Interstate Drive.

“They’re a big part of what we do,” said Swartz, who as manager of the McLean County Farm Bureau plays an integral role in planning the fair’s logistics each year. “This is a place for the members of 4-H to share their exhibits, and that’s extremely important.” 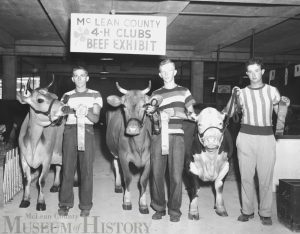 Over the years, the fair has evolved, particularly with the range of entertainment offered.

Swartz said he believes the Grandstand entertainment shows, held the first four days of the fair, will be crowd-pleasers.

“These have always been popular events,” Swartz said. “This is a chance for people to earn their bragging rights.”

The Grandstand entertainment at this year’s fair is rounded out Saturday with a good old-fashioned demo derby.

Swartz said visitors will be greeted to a number of new entertainment options during this year’s fair. Free entertainment is being offered from noon to 8 p.m. each day, which is an expansion of offerings from years past.

A sample of the free entertainment includes a banana derby, reptile adventures, extreme raptors and a petting zoo.

Swartz said he and fellow organizers take great pride in the McLean County Fair, which has been proudly trumpeted as the world’s largest county 4-H fair.

McLean County and fairs have a long history together, going back more than a century-and-a-half.

Although the McLean County Fair in today’s iteration did not begin until 1932, the earliest remnants of a 4-H type of showcase go back to 1917.

Going back even further, Swartz said McLean County has hosted various different types of fairs since 1852.

“We’ve been doing it every year since,” he said. “It even happened during the war years.”

While each year’s McLean County Fair seemingly comes and goes in a flash, Swartz said the behind-the-scenes planning is a nearly year-round process.

During the fair, Swartz said he already begins planning for the next year’s event as he makes a mental critique of what does and does not go right during the course of a particular festival.

Swartz and other McLean County Farm Bureau representatives meet periodically throughout the year with the U of I Extension and the 4-H, and other important incidentals — including the Grandstand entertainment — are solidified in the winter months.

The entire planning process is out of the public eye, and that is exactly how Swartz said he wants it to play out.

“There are lots of small, minute things we’re paying attention to,” Swartz said. “If it all flows well, (the public) will never even know it happened.”