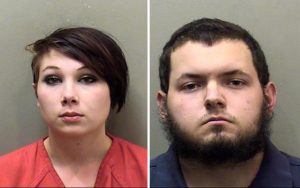 One person faces sentencing and another will go to trial for the July stabbing death of an East Peoria woman.

On Dec. 20, Christine Riggenbach Roush, 22, pleaded guilty to first-degree murder in the stabbing death of her biological mother, Teresa Ann Poehlman, 47. Roush’s co-defendant, Matt Isbell, 20, of Marquette Heights, will go to trial May 7.

In October, Isbell’s bond was reduced from $3 million to $1 million, though he remains in custody at the McLean County detention facility, as does Roush.

Roush’s plea did not include a sentence agreement. She faces 20 to 60 years in prison and will be sentenced Jan. 31 by McLean County Judge Robert Freitag.

Roush and Isbell were arrested July 7, five days after Poehlman’s body was discovered by two hikers in the wooded trails of Funks Grove Nature Preserve in southwest McLean County.

The death was determined a homicide by McLean County Coroner Kathleen Davis, and Poehlman was later identified by family members and friends by a photo of a tattoo on the victim’s left forearm which read, “Leo’s Lady.” 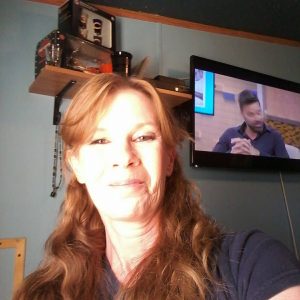 Teresa Ann Poehlman, in a Feb. 28 photo posted to her Facebook page under the name Teresa Ann Gruber.

Isbell alleges that Roush planned the murder after Poehlman threatened to tell authorities about Roush’s alleged prostitution, an accusation that would not bode well for Roush with regard to custody of her 2-year-old daughter.

In a probable-cause statement provided by McLean County State’s Attorney Jason Chambers in July, Poehlman came to Bloomington to meet with Roush and was staying at a local motel.

In a first interview, Roush said she saw her mother July 1, but denied any involvement in her murder. Bloody clothing was found by police in Roush’s bag during a second interview.

Isbell told police he witnessed Roush stab her mother, then the two fled the park and returned to the motel where Poehlman was staying.

Investigators found blood in the passenger side of Isbell’s vehicle, and were able to confirm through a surveillance video his account of the clothing each were wearing the night of the murder.

Roush allegedly planned the murder, Isbell told police, and a third person who is not currently in custody, knew of the plan. The status of the third suspect is unknown, but, according to  Woodford County State’s Attorney Jason Chambers, that person knew of the plot to murder Poehlman. 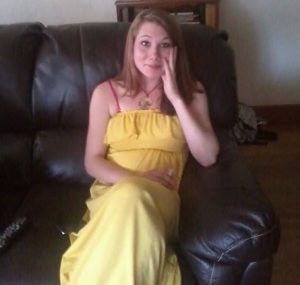 Court records in Tazewell and Peoria counties link Roush to several criminal and family cases under her former name, Christine Riggenbach, including charges of disorderly conduct and theft, as well as a number of orders of protection connected to Roush’s custody battle.

Roush also was arrested in McLean County on June 12 for possession of drug paraphernalia and possession of a controlled substance, and was released on personal recognizance bond when she was arrested and charged with two counts of first-degree in July.

Poehlman had a history of battery charges dating at least to a 1998 Denton County, Texas criminal record, where, under two other last names, Link and Meekins, she was charged with assault/family violence.

Poehlman was listed as living in Washington, Ill. in that case. Later, in Tazewell County, Poehlman was found guilty in 2010 with interference with the reporting domestic violence, and was sentenced to 20 days in jail and one year of probation.

A year later, Poehlman was found guilty of a Class 2 felony domestic battery charge, spent 179 days in jail and was placed on 12 month’s intensive probation. Poehlman was charged in 2015 with aggravated domestic battery, and, due to her previous convictions, was charged with a Class 4 felony and served nearly two years at Logan Correctional Center. She was paroled Jan. 17, 2017.

Other than traffic offenses in Tazewell County, Isbell does not appear to have a previous criminal record.