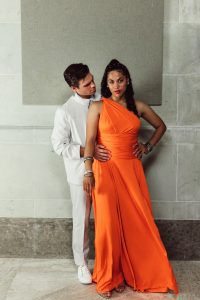 Shakespeare’s historical drama “Ceasar” will include contemporary references when presented July 12 through Aug. 10 at the ISU Center for the Performing Arts Theatre. (Photo courtesy of Illinois Shakespeare Festival)

It’s been a McLean County mainstay for more than four decades, but the Illinois Shakespeare Festival continues to evolve with new offerings and additional features.

A new partnership forged for this year’s summertime extravaganza is an example of this philosophy, organizers say.

After an intensive behind-the-scenes planning and rehearsing process, the curtain is set to rise this week on the 2019 festival season, which runs from Thursday, June 27, to Saturday, Aug. 10.

This year’s lineup includes adaptations of three classic, time-honored plays: “As You Like It,” “Julius Caesar” and “Pride and Prejudice.”

In addition to the performances themselves, Producer Janet Wilson said a number of other touches are being introduced to this year’s program, including a partnership with the Epiphany Farms Hospitality Group, which is providing a series of meals on select performance dates.

Wilson said festival organizers sought the partnership for a number of reasons, including the hopes of bringing in a broader base of people who might not otherwise consider taking in a play.

“We reached out to (Epiphany),” Wilson said. “We thought that if we could pair these two things together, it could be a really neat experience for our patrons. It’s all about the patrons.”

In a statement, Ken Myszka, CEO of Epiphany Farms in Bloomington, outlined why his operation aspired to be a part of this year’s festival.

The offerings, Myszka said, will include “a perfect cultural pairing of farm-to-table, regenerative dining” alongside the festival performances.

“Epiphany Farms Hospitality Group is excited to partner with the Illinois Shakespeare Festival to make Bloomington the destination this summer,” Myszka said.

Also in the works is a special one-time cabaret show, set for Saturday, Aug. 10. Wilson said the event will showcase each of the actors’ individual strengths, ranging from singing, jazz and juggling. 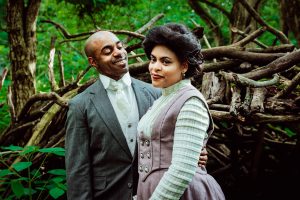 Shakespeare’s comedy “As You Like it” will be performed various dates from June 27 through Aug. 9 at the ISU Ewing Cultural Center. (Photo courtesy of Illinois Shakespeare Festival)

But the centerpiece, as always, is the plays themselves. Wilson and others organizing this year’s festival have been describing the three plays as “fresh takes on classic stories.”

One example Wilson pointed out was the local rendition of “Caesar,” which includes mentions of social media in the storyline.

“It should really appeal to a contemporary audience,” Wilson said of all three of this year’s performances. “We’re really trying to attract a younger audience.”

While there will be modern-day adaptations to the plays, the integrity of the historic framework is also a part of the process.

Case in point: In a news release outlining this year’s performances, Deanna Jent shared her vision behind “Pride and Prejudice,” which Jane Austen authored. Jent developed the local stage adaptation of the classic story.

“I want to preserve as much of Austen’s language as possible because sentence structure and word choice are part of the unique artistry of the novel,” Jent said. 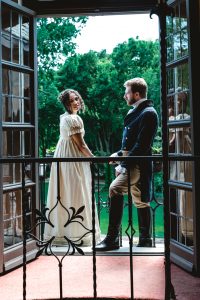 “Pride and Prejudice” isn’t Shakespeare but still a classic story by Jane Austen. The stage presentation will be July 5 through Aug. 8 at the Ewing Cultural Center. (Photo courtesy of Illinois Shakespeare Festival)

Wilson said the upcoming curtain’s rise on this year’s festival season is the culmination of what essentially is a year-round planning process.

“There’s a lot that goes on behind the scenes,” Wilson said. “The first thing we do is figure out the titles.”

In fact, Wilson said planning on the groundwork for next year’s 43rd season is already underway as selections are being considered.

The festival, which is an outgrowth of Illinois State University’s theater department, also boasts performers, costume and set designers and other professionals and students from all across the country.

“There’s a tremendous amount of planning that goes into it,” Wilson said.

For full details on this year’s festival, including performance dates and times, visit www.illinoisshakes.com or call the Performing Arts Box Office at 309-438-2535.