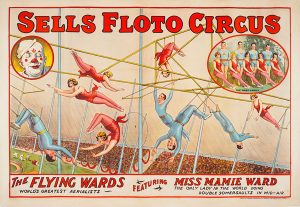 One of the many circus photographs donated to by Herbert Ueckert, of Sarasota, Fla. to the Illinois State University Milner Library. Uekert donated 250,000 new items to ISU. (Photo courtesy of ISU)

Illinois State University’s already robust collection of circus-related artifacts just got a bit larger — to the tune of 250,000 new items.

Early this month, ISU officials announced a Florida-based circus aficionado gifted a range of artifacts to the Circus and Allied Arts Collection, which is housed within the university’s Milner Library.

Herbert Ueckert, of Sarasota, donated to the library a collection he amassed over multiple decades. It includes a range of rare artifacts, including artists’ original sketches of professional circus posters, candid and publicity photographs, clown props and performer’s costumes.

In a statement, Ueckert said he gifted his collection to the Milner Library because it houses one of the largest collections of circus-related artifacts. Prior to making the donation, Ueckert and other family members met with Milner’s special collections staff.

“We never make a gift without first researching all of the institutions that we are considering, which we did with our circus collection,” Ueckert said in the statement. “After our research and planning, our choice was easy, and that’s why we asked Milner Library to consider our collection for a gift.”

When asked how many total pieces of circus artifacts are housed within ISU, Mark Schmitt, a special collections specialist at the Milner Library, said it is difficult to quantify.

“It’s a giant, giant collection,” Schmitt said in an interview with the Chronicle. “It’s more than likely larger than any other place on the planet. We have a crazy amount of photographs.”

While some of Ueckert’s donations closely mimic other items previously donated to the Circus and Allied Arts Collection, Schmitt said many of the artifacts are new to the facility.

The new artifacts include a letter written to Edwin “Poodles” Hanneford, who was a member of the Royal Hanneford Circus and is considered one of the greatest trick riders in history. 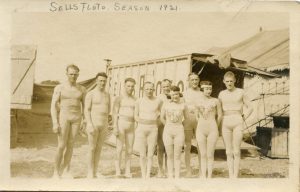 The Aerial Smiths were trapeze entertainers nearly 100 hundred years ago. This is one of the thousands of artifacts donated by Herbert Ueckert, of Sarasota, Fla. to Illinois State University. . (Photo courtesy of ISU)

Ueckert also donated photos of the Aerial Smiths, who were trapeze entertainers, as well as images from the Sells-Floto Flying Wards from the 1920s.

The latest additions build on a collection of artifacts that began in the 1950s. But the reason the Milner Library houses such a vast array of memorabilia points to a piece of the area’s history.

“Bloomington-Normal was known for quite a few years as the trapeze capital of the world,” Schmitt said.

Beginning in the 1870s, McLean County became fertile ground for would-be aerialists — some who became well known within the circus community in the decades that followed. Some of the students went on to wow audiences for such companies as the Ringling Brothers and Barnum and Bailey Circus.

From his vantage point, Schmitt said he is happy to play a role in curating the ever-growing collection of artifacts.

“Considering Bloomington’s past, it’s obviously an important thing,” Schmitt said. “It’s a piece of local history that would be shameful not to continue.”

While circuses are often associated with history, Schmitt said they also provide a long view into the world at large. 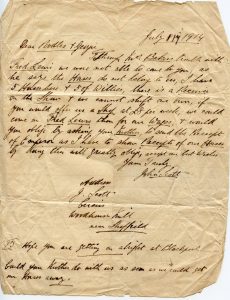 A letter written to Edwin “Poodles” Hanneford, who was a member of the Royal Hanneford Circus, is part of the Herbert Ueckert collection donated to the Illinois State University Milner Library. . (Photo courtesy of ISU)

“It’s important because the circus, like it or not, is a great lens to view history,” he said. “It runs parallel to pop culture. It’s an interesting lens to look through.”

While the Milner Library’s Circus and Allied Arts Collection is academic in nature and is not a museum, Schmitt said it is open to the general public for viewing.

“They are more than welcome to come, and we will accommodate them,” he said.