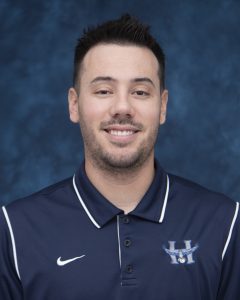 Razo replaces Jimmy Frankos who has taken an assistant coach position at his alma mater, the University of Iowa.

“Coach Razo has been part of this program for several years. He understands the history and impact Heartland Community College can have on a student-athlete,” said Athletics Director Ryan Knox. “I am very confident in Chris’s ability to further our athlete’s success on and off the field.”

Razo joined the Heartland staff in 2018, serving as pitching coach.

Razo competed at Illinois State University where he was drafted by the Milwaukee Brewers in the 24th round in 2013. While at Illinois State, Razo was selected to the MVC All-Conference first team and also won pitcher of the year in the Missouri Valley Conference. Razo also helped lead the team to a school record 39 wins and the first and only MVC outright title.

Prior to attending Illinois State, Razo was part of the Heartland Community College program. During his two years as a Heartland player, he was first team all-Region 24 and MWAC Pitcher of the Year and helped lead the Hawks to the school’s first appearance at the NJCAA Division II World Series.

“I am beyond excited to take over this program that I have now been part of as a player and a coach. My best baseball memories on and off the field came from Heartland and I hope that’s the same for all the players.” said Coach Razo. “Our goal has always been to win a national championship and that will not change. We expect to go to compete for a national championship this year.”