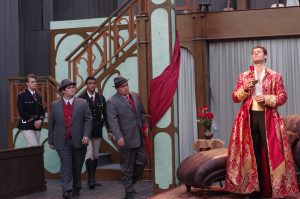 Once unofficially dubbed “Shakespeare in the Cornfields,” today the internationally recognized Illinois Shakespeare Festival (ISF) draws thousands of theatregoers to Bloomington to soak in Shakespeare’s works as well as the ambience.

Patrons who came to the festival in its early years sat on uncomfortable folding chairs while watching the works of Shakespeare unfold on a makeshift stage placed over the tennis court of Illinois State University’s Ewing Manor.

Today, patrons picnic on the grounds and enjoy pre-show entertainment prior to the performances which take place in a state-of-the-art, Elizabethan-style theatre that was built at Ewing Manor.

“Our goal is to provide something for everyone as we reimagine Shakespeare,” according to Kevin Rich, Illinois Shakespeare Festival’s artistic director.

“Some people may think of him [Shakespeare] to be a diamond and caviar person, but he was writing to a popular audience through a huge variety of plays,” he added.

In its 39th season, the Illinois Shakespeare Festival performs in three different plays on rotating nights.

Rich said, “People who used to come to the festival as a kid are now coming back and bringing their children.”

Over an eight-week period, a group of more than 100 artists convene including 15 professional actors who comprise the festival’s performing company.

This year’s festival which began on July 8 and will run through Aug. 13 rotates performing “Twelfth Night”,  “Hamlet”, and “Peter and the Starcatcher” with the exception of Mondays when no performances take place.

Repertory theatre, in which an in-house company performs a series of works in rotation, is becoming increasingly rare in this country, Rich added. 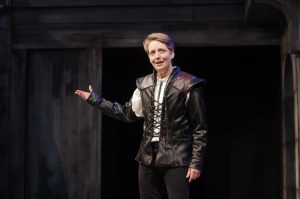 “There is something really magical about having one company of actors in all three shows at the same time,” he added. “It gives patrons the opportunity to see just how talented these actors are to stretch themselves in different roles from night to night.”

This is the fifth time in ISF history, it will be performing “Hamlet”; however, it is the first time the title role will be played by a woman.

Deborah Staples, who took on the roles of Cleopatra and Queen Elizabeth in previous ISF productions, will play Hamlet.

When Staples took on those roles, she cut her hair short so that it would be easier to attach her character’s wigs, Rich said.

During a rehearsal of  “Antony and Cleopatra” he said Staple looked like Hamlet with her pageboy haircut and cargo pants.

Back in Shakespeare’s day, Rich said he cast men as women, so why not cast the other way.

The ISF also is performing “Peter and the Starcatcher”, an adaptation of the best-selling children’s novel.  The story originates with Peter Pan, Captain Hook, and a young star catcher named Molly,

The cast includes Christopher Peltier as the young Peter, Chris Amos as Black Stache, Eva Balistrieri as Molly Aster, and Rich in the role of Smee.

A group of undergraduate interns from Illinois State University, Illinois Wesleyan and the Cincinnati Conversancy of Music make up the cast for Shakespeare Alive! — a theater for young audiences program.

Since 2008, the intern group performs a free children’s 45-minute program twice a week on a week on Wednesday and Saturday mornings.

This year’s play “Rodeo” is about a cowgirl and her mule. It is a Western with a little Shakespeare thrown in.

The interns also serve as understudy the roles of the professional actors and play ensemble roles in the main stage productions, Rich said.

At its first year over 500 actors came to audition.  The original group of actors included Illinois State University School of Theatre alums Gary Cole and Tom Irwin went on to become members of Chicago’s Steppenwolf Theatre.

Actors Tim Russ who appeared in the “Star Trek: Voyager” series and William Peterson who starred in the original “CSI” also have appeared in ISF productions.

Today, ISF and has grown into a destination event, Rich said. It also has a year-round presence in the Central Illinois area.

“They have performed for about 5,000 students over the last couple of years,” he said.

Each autumn, the ghost of William Shakespeare takes guests on tour of the grounds where he introduces them to many scary characters from Shakespeare’s plays, he added.

Next year will be the 40th anniversary of the festival and Rich will begin hiring directors and actors for next year’s productions as soon as this year’s festival wraps up said, it is going to be a big season for us.

For more information and to purchase tickets visit http://illinoisshakes.com/