Over the years, the Illinois State University’s Civic Chorale has fluctuated in members between 50 and 200. (Photo courtesy of ISU Civic Chorale)

When its first season bowed in the fall of 1968, the organizers of Illinois State University’s Civic Chorale had a simple mission that was untapped at the time — create beautiful music, in harmony, from people of all walks of life.

The guiding principle has remained the same in the five decades that followed, according to leaders within the group, but has grown over time.

Edward R. Hines an ISU professor emeritus who retired in 2003, looked back at the chorale’s deep history in a paper, “A Proud Past and a Promising Future,” in 2015. Hines also has performed in the Civic Chorale for more than 30 years.

Hines’ glimpse into the past demonstrated the need for the chorale, which initially was named the Illinois State University Community Chorus under the leadership of Jim Roderick, who worked in the music department at the time.

“Prior to (fall 1968), there were limited opportunities in Central Illinois for adults to enjoy singing classical works of music,” Hines wrote. “Choral groups at the two universities, Illinois State and Illinois Wesleyan, were limited to enrolled students.”

Outside the walls of the two Bloomington-Normal universities, Hines in his paper noted other limited offerings.

“There were church choirs, to be sure, but those focused more on sacred music,” Hines wrote. “Barber-shopping offered an opportunity, but only in the barbershop style of music.”

John Koch, current director of the Civic Chorale, said the group’s strength comes from its diversity. As a volunteer-driven group, members are not subjected to stringent auditions. The only prerequisite, he said, is a ready and willing desire to make music.

“It’s an outlet for people to sing,” Koch said of the group in an interview with the Chronicle. “The group has really been building again the past couple of years.”

Koch, who has served as the civic chorale’s 11th director, said membership has wavered over the years, from as low as 75 singers to a high of 200 singers. 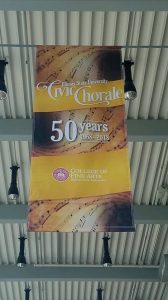 The group currently is comprised about 100 members, Koch said, and the mix represents the array of talent and background within the broader community.

“Half of them are students, and the other half are people in the community,” Koch said.

While the group practices behind-the-scenes for much of the year, its most visible moments are in the two large-scale concerts put on each year at ISU’s Center for the Performing Arts. A fall concert is held in November and a spring one takes place in April.

The Civic Chorale’s milestone anniversary was commemorated in last month’s fall concert with a number of special reflective moments — including recognition of Patricia Foltz, an ISU faculty member who has served as the group’s piano and organ accompanist for more than 25 years.

“It was a really beautiful moment,” Koch said of the recognition and pause for reflection.

The Civic Chorale takes part in other activities and events beyond its two large-scale concerts.

The group held a free festive concert at the McLean County Museum of History’s historic courthouse on Dec. 18.

The Civic Chorale was accompanied by special guest artists, including the a capella group Beauties and the Beat, who performed highlights from their holiday concert, Christmas Dreaming.