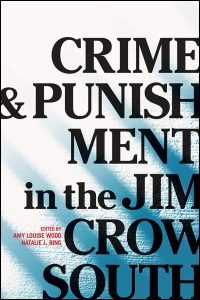 “Crime and Punishment in the Jim Crow South” contains a collection of essays from scholars exploring different aspects of the criminal justice system and is now available.

A new book from Illinois State University’s Amy Wood, “Crime and Punishment in the Jim Crow” South”, looks at the role criminal justice played as a tool of racial oppression in the southern United States in the late 19th and 20th centuries.

“We’re in this moment where criminal justice in the Jim Crow south is part of our vocabulary, but what do we know about those roots?” said Wood, a professor of history who co-edited the book and penned a chapter.

In the wake of the Department of Justice opening an investigation of potential atrocities in Alabama prisons, and talk of capital punishment and police killings as forms of “legal lynching,” and of felon disfranchisement as the “new Jim Crow,” the book provides a historical background for the development of prisons, policing, and capital punishment as forms of racial control.

While many scholars have focused on lynching and extralegal violence during Jim Crow,* the history of policing, capital punishment, and incarceration in the South is relatively unexplored. “The literature is surprisingly thin,” said Wood. “The majority of prisoners in the postbellum south were African American, up to 90 percent in the 1880s and 1890s,” she said.

“Generally, white crime was overlooked. Black people were over-policed, more likely to be imprisoned, and given longer prison sentences.”

The book argues that to understand present-day criminal justice—the racial disparities endemic to it, as well as the concern for profit and retribution over rehabilitation—we must understand this history.

Crime and Punishment in the Jim Crow South contains a collection of essays from scholars exploring different aspects of the criminal justice system. Several chapters focus on crime, including police investigations of black homicides in Memphis, a case study of the first black police officer in New Orleans, and a look at the “Dixie Mafia.” Other chapters highlight incarceration and capital punishment, including one examining the lives of black, female prisoners who were forced to labor for the garment industry, and another that follows the racialized transition from hangings at the county level to electrocution at the state level. Wood noted that at the same time southern states were constructing Jim Crow regimes, they were also undergoing a process of state modernization, which included the centralization of state power.

Wood, who is the author of “Lynching and Spectacle: Witnessing Racial Violence in America”, 1890–1940s, wrote a chapter that delves into South Carolina Governor Coleman Livingston Blease’s prison reform efforts as a way to “resist the modern bureaucratic state and bolster his own authoritarian power,” said Wood. During his time as governor from 1911-1915, Blease pardoned thousands of prisoners and did away with convict leasing. “Convict leasing, in some ways, was worse than slavery,” said Wood of the system where states would ship prisoners out to plantations, mines, and other industries to work. “The industries knew there would always be a steady supply of workers from the prisons, so would often work prisoners to death without consequences.”

Blease’s tenure shows the distinct ways that prison reform operated in the South. Although he adopted the humanitarian rhetoric and some goals of national prison reform, he rejected the state infrastructure that would have allowed for reform.

“Instead of setting up bureaucracies to create oversight on the state prison, Cole Blease does two things,” said Wood. “He sends prisoners off to the counties to work on chain gangs—a practice almost as brutal as convict leasing—or he pardons them. In other words, he empties out the state penitentiary.”

She added that most of the pardons of black prisoners were for offenders of “black-on-black” crime, not because Blease believed these men had been unjustly imprisoned, but because he was an unabashed racist. “He’d say, ‘Well, if you kill a black man, you’re doing the state a favor.’”

In this way, Wood said “Crime and Punishment in the Jim Crow South” also makes a case for southern distinctiveness.

“For a while, there has been a backlash to the idea of ” Southern exceptionalism” from southern historians, who argue that racial injustice and white supremacy were national problems. And that’s true,” said Wood. “Yet each chapter in the book does make a case for regional differences and the existence of racial dynamics particular to the South.” She added, “You might call the book part of a backlash to the backlash.”

“Crime and Punishment in the Jim Crow South” is available now.