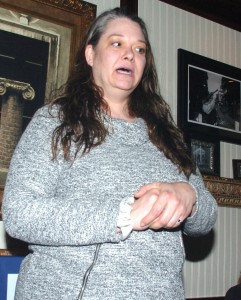 Heather Yohnka of Peoria talks about her experiences with the biblical-based Jobs Partnership program that helped her find and keep meaningful employment after being incarcerated. Yohnka spoke to a small group at a recent League of Women Voters’ Drinks & Dialogue monthly event. (Photo by Elise Zwicky/for Chronicle Media).

They’ll be the first to tell you, however, that a faith-based program called Jobs Partnership has given them the second chance they needed to overcome criminal backgrounds you’d never guess they had.

Matthews and Yohnka spoke about their Jobs Partnership experiences recently at the League of Women Voters’ monthly Drinks & Dialogue program at Hearth in Peoria Heights.

“It has really made a difference in my work ethic,” said Yohnka, who graduated from the 12-week program last November and now works as a cook at the Peoria Civic Center.

Jobs Partnership teaches female inmates how to be better prepared to get and keep meaningful employment after incarceration. The classes are also offered to the community at the South Side Mission and recently branched out to include male inmates at the Peoria County Jail.

Built on the idea that relationships are key to changing and improving lives, the program began in the mid-‘90s in North Carolina when a businessman working on a church had a shortage of employees, and the pastor of the church had able-bodied parishioners in need of jobs.

The first community class in Peoria was in 2001. The program expanded to include female inmates at the Peoria County Jail in 2007 and at the Illinois Department of Corrections in 2010.

“We’re now in eight state prisons, two federal prisons and three county jails: Peoria, Lake and McLean. We also have community classes in Peoria and Bloomington. Our goal is to take it through the Department of Corrections across the state, so we’re looking for more volunteers to teach the classes,” said Parks, the only paid employee for the local program, which is housed at Heaven’s View Christian Fellowship at 602 W. Richmond Ave. in Peoria.

The church doesn’t fund the program; it depends on private donations and volunteers.

“We currently have 120 volunteers. This program would not go if it wasn’t for our volunteers,” Parks said.

One of the volunteers is Ron Budzinski, chairman of the League of Women Voters’ Drinks & Dialogue program, who started teaching Jobs Partnership to male inmates at the Peoria County Jail 10 months ago. He said 14 inmates are in his current class.

Speaking to an audience of about 12 at the Drinks & Dialogue program, U.S. Air Force veteran Heather Yohnka said she came to the South Side Mission after serving time in the Texas Department of Corrections for nonpayment of child support and getting into a skirmish with local police after being in a volatile relationship.

“I learned a lot of life lessons through Jobs Partnership,” Yohnka said. “Morals and values my parents had given me growing up, but I never really realized that those could be taken to the next level into the work place.”

Parks said the program uses the Bible as its textbook and teaches a foundation of skills to help people get a job and keep the job because they learn to be accountable to a higher power.

“We talk about who’s the boss and authority. We answer to God. We have a human boss, but if your human boss isn’t around to see what you’re doing, you still have a boss all the time.”

The program also teaches about integrity, communication, attitude, handling conflict, stewardship of time and money and the importance of giving back.

Theresa Matthews graduated from the Jobs Partnership program two years ago and has been working steadily ever since at Chick-fil-A. The eatery’s owner, Jason Counselman, volunteers as a Jobs Partnership instructor. Matthews had ended up at the South Side Mission through a program for first-time federal drug offenders.

“I learned so much through Jobs Partnership,” she said. “We learned how to dress and how to approach people. My goal today is to work harder than anyone else.”

Matthews has worked her way up to the position of team leader at Chick-fil-A and is finishing her GED.

“I didn’t grow up knowing Christ,” she said. “My dad is an atheist, and my parents were both partiers. I bounced around from home to home. So when I came to the South Side Mission, I was soaking up all this information. My boss knew that I was on federal probation, and he still gave me a chance.”

“We have wonderful employers, but we’re looking for more people to give others a second chance,” Parks said.

Jobs Partnership also operates two independent living homes for female ex-offenders coming out of the county jail or the Department of Corrections who have graduated from the program.

“We’re in the process of revamping it to see what we can do better,” Parks said. “Seventy percent of our residents were employed this past year, and only 10 percent returned to prison. We would love to have a zero percent recidivism rate.”

For more information about the Jobs Partnership program or to volunteer, call Cheryl Parks at (309) 682-2360 or email her at jobspartnershippeoria@gmail.com.

The League of Women Voters’ next Drinks & Dialogue topic will be “Can the Flint, Mich., water crisis happen in Peoria” at 5:30 p.m. March 16 at Hearth, 4604 N. Prospect, Peoria Heights. The program is free and open to the public.