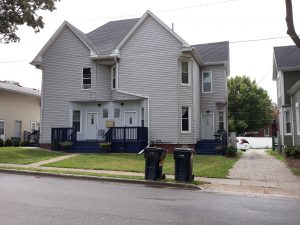 The Labyrinth House in Bloomington, where up to eight women who were formerly incarcerated live and work to get their lives back on track (Kevin Beese/Chronicle Media photo)

Nicole Williamson shudders to think where she would be without the YWCA McLean County’s Labyrinth program.

“I don’t know where I’d be at all,” Williamson pondered a recent weekday morning before being picked up for her shift at an area garden center.

She was sentenced to three years in the Illinois Department of Corrections for drug possession. Williamson served 11 months of that term before being released.

Early in her prison sentence, her boyfriend – who, Williamson said, was dealing the drugs that she was partying with when she got caught – wound up missing in action.

“I grieved over that for a little while, but then I had to get down to business and I was like ‘OK, well, this isn’t going to work.’ So, I had to get over not going home to him,” Williamson remembered.

Around that same time, Williamson received a letter from her mother, who she had been estranged from for three years.  Rekindling their relationship, Williamson planned to live with her after being paroled, but her mother died during that time.

Pressed for somewhere to go as she was getting near the time of her release from prison, Williamson began writing to halfway houses.

Another inmate in a similar situation told Williamson about Labyrinth House, a transitional living program in Bloomington for formerly incarcerated women, where residents live in a shared two-bedroom furnished apartment and receive on-site support from residential counselors each evening. Up to eight residents can live in the house up to two years.

Williamson, a former resident of the Quad Cities, passed her interview with Labyrinth program director Kara Kirk, but there was no room for her at the house. She was placed on a waiting list and had to live in a homeless shelter in Peoria until space opened at Labyrinth’s apartment building.

“It was rough,” Williamson said of her time at the homeless shelter. “There were people drinking, getting high, the smell of marijuana.” 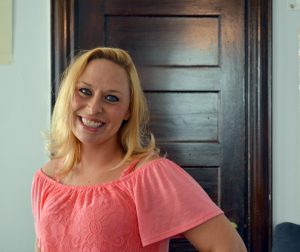 Nicole Williamson, a participant in the YWCA McLean County’s Labyrinth program for formerly incarcerated women, stands in front of one of the rooms of Labyrinth House, the program’s transitional living facility in Bloomington. (Photo courtesy of YWCA)

Williamson remembers being in Walmart when she got the call that a space became available at Labyrinth.

“I didn’t even want to wait to move in. I was so ready to go to Bloomington,” she said.

She said the Labyrinth program has been everything she hoped it would be.

“It changed my life,” Williamson. “It has been a blessing for me.”

Williamson will mark two years being sober in November. She is trying to get back in her children’s lives and is one test away from getting her General Equivalency Diploma. She wants to get her license back enabling her to drive so she doesn’t have to rely on rides or a bus to get to her job.

“It’s baby steps I’m taking,” Williamson said about working to het her life back on track.

“We train women who have been in prison,” said Campbell, a former Illinois State University professor. “They have the opportunity to be a better person.”

Sebastian said the idea for the Labyrinth program started in 2004 under the auspices of helping women struggling with addiction, not those who where formerly incarcerated.

“We were looking as a single house where we would have addiction recovery services,” Sebastian said.

However, when Sebastian and Campbell heard that there was a housing need for women after incarceration, they decided to pick up that torch. 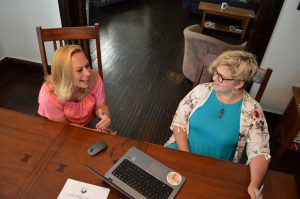 They received help locating and buying neighboring buildings in disrepair for the Labyrinth program. They reached out to individuals in the building trades, church groups, students and others in the Bloomington area to help with the rehab work. Home Depot donated products it was discontinuing.

One of the buildings serves as the location for program meetings; the other provides the large living spaces for the program participants.

“Every apartment had to be restored as if it was a house,” Campbell said. “That’s how much work was needed.”

“It’s a community project,” Sebastian said of the completed rehab effort. “We have fathers and daughters, grandparents involved, our own families involved.”

Sebastian and Campbell have remained on the board that oversees operations of the Labyrinth program.

“The program was created by two women in the community who saw a need,” said Christy Germanis, director of marketing and public relations for the YWCA McLean County. “As the program was established, they saw how it fit in with the YWCA and the work it does.”

Along with the Labyrinth House living quarters, the program also offers mentoring, economic/employment services and counseling. 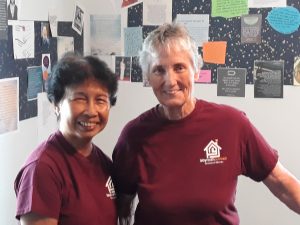 “We help them build a resume. We do mock interviews, help them apply for jobs,” said Kirk. “We give them support when the need arises. We help them with budgeting and saving money. We do case management. Anything they may need help with, we are there to help them.”

Residents pay a percentage of the money they earn working to the YWCA to cover lodging and program fees. The program participants are also required to put a percentage of their earned income into a savings account to build a financial nest egg.

Labyrinth program participants meet with a caseworker once a week to ensure they are progressing on their established goals.

Guests need to be pre-approved before being at Labyrinth House during visiting house and even then, guests can only be in the house’s common areas.

“The program’s goal and hope is for the women to reconnect with their families, especially outside of visiting hours,” Kirk said. “They have an opportunity to get together with their family, their children.  We will approve other visits, too. We want them to strengthen their relationships.”

Labyrinth served 81 women in fiscal year 2019 through its transitional living and outreach programs.

Kirk said one of the big issues facing formerly incarcerated women is transportation.

“It can be a struggle,” Kirk said. “Without transportation, they might not make it to their job, medical appointments, child care. Transportation consistently affects them.”

The Bloomington community has been supportive of the program, Kirk said, and city leaders have said they want to give women who have been incarcerated the chance to make a new life for themselves.

“But based on their backgrounds, there are still times things are difficult for them,” Kirk said of the women who have spent time in jail or prison. 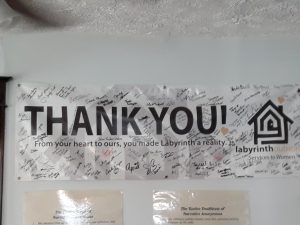 A banner, signed by individuals who worked on restoring the two buildings that now serve as the Labyrinth meeting and living spaces, hangs on the wall of a Labyrinth building. The banner was carried in the Bloomington Labor Day Parade after the rehab work was completed. (Kevin Beese/Chronicle Media photo)

The YWCA’s Germanis noted that a $75,000 Google grant would help the YW teach work skills to Labyrinth participants.

Kirk said the training program could help gloss over an employment gap on an individual’s resume.

“Coming right from being incarcerated, the gap in employment can be difficult to explain to an employer,” Kirk said. “With rejection comes low self-esteem and their confidence being down. With this grant, we will be able to provide them with skills in a supportive environment.”