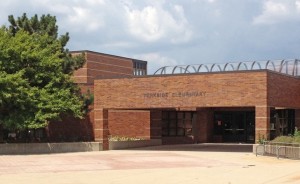 Parkside Elementary School in Normal was recently recognized by the state as a Title I Distinguished School for closing achievement gaps.

Veteran McLean County Board member David Selzer has been appointed to fill a vacant post on the decision-making body. Selzer, who served on the County Board from 2000-08, has been named to the District 5 seat that was emptied a month ago when Sondra O’Connor stepped down due to moving outside the state. Selzer’s appointment runs through the end of 2016. He has announced he will run for the remaining two years on O’Connor’s seat during next fall’s election.

Storm water, sewer rates could increase over next decade

Citing deferred maintenance and a lengthy list of infrastructure-related improvements over the next decade, city of Bloomington officials are mulling a proposal to increase storm water and sewer rates through a series of incremental phases in the next decade. According to officials in the city’s engineering department, a plan is on the table to more than double both utilities’ rates in the next decade. Gradual annual increases could be part of the utility’s operations plans. The Bloomington City Council was scheduled to discuss the rate increases Monday, Dec. 21, after the Chronicle’s press deadline.

Bloomington Police to host Cookies and Coffee with a Cop event

Spreading holiday cheer, Bloomington Police officers will greet last-minute gift-giving shoppers at Eastland Mall, 1615 E. Empire St., from 4 to 6 p.m. Wednesday, Dec. 23. Mall-based retailers Gloria Jean’s and Mrs. Fields will provide the refreshments. The public relations event is an opportunity for residents to share their comments and concerns with local law enforcement authorities. The Cookies and Coffee with a Cop event will be staged near The Back Store inside the mall.

The Bloomington City Council has set a date for a public hearing on a proposed tax incremental financing, or TIF, district for an east side commercial corridor that has a number of vacant storefronts. The hearing will be held at 7 p.m. Monday, Feb. 8, at City Hall, 109 E. Olive St. Residents will have an opportunity to weigh in on plans to place the TIF over 65 parcels and 201 acres of commercial property. The proposed TIF is bound by Empire Street, Veterans Parkway and Stortz Drive. TIF is a mechanism that allows municipalities to borrow money for infrastructure improvements. The increased property tax revenue from the improved land is then diverted from the tax rolls to pay off the loan.

An attorney’s plea to turn down a sexual assault case has been dismissed by McLean County Judge Casey Costigan. Gregory Suddreth, of Arizona, is accused of sexually assaulting a woman three years ago in Bloomington. Suddreth’s Chicago-based attorney, Donald Angelini, asked to have the case dismissed because First Assistant State’s Attorney Adam Ghrist discussed with the grand jury an incident about a previous indictment against Suddreth. But Costigan disagreed with the assertion, stating the importance of sharing historical information with juries.

Terry Lindberg, a member of the Normal Public Library’s board of trustees, began overseeing the Bloomington Public Library on an interim basis on Wednesday, Dec. 17. Lindberg will receive an hourly salary of $85 and is expected to put in about 30 hours of time each week. Lindberg is nearly halfway through a six-year term on the Normal Public Library Board, and is expected to continue that role alongside his interim responsibilities. Lindberg previously served as an administrator within McLean County’s offices.

Parkside Elementary School in Normal was honored recently by the Illinois School Board of Education for taking steps to close the achievement gap. Parkside was named a Title I Distinguished School for closing gaps across all demographic groups, including race, ethnicity, gender and socioeconomic status. Parkside’s teachers and faculty were specifically singled out for partaking in small group settings to ensure children’s specific needs were being addressed.

No waste collection will occur in the town of Normal on Christmas Day. The regularly scheduled Friday, Dec. 25, pick-up will instead take place Monday, Dec. 28. According to department officials, the regular pick-ups of bulky waste, landscape waste and brush collection will be collected the week of Monday, Jan. 4, if time allows.