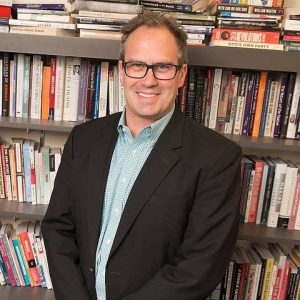 The McLean County Museum of History will welcome back Dr. Andrew Hartman, professor of history at Illinois State University, who will present a program about America’s struggle over the unprecedented social changes since the 1960s, as the cluster of social norms that had long governed American life began to give way to a new openness to different ideas, identities, and articulations of what it meant to be an American.

This free, public program will be on Saturday, Nov. 16 at 1:15 p.m. in the Museum’s second floor courtroom.

Donald Trump’s now famous campaign slogan, “Make America Great Again,” evokes the fervent belief among many Americans that the nation is no longer theirs. The slogan has had contemporary appeal, to be sure. But it also speaks to a narrative of decline that has defined conservative attitudes since the 1960s.

At bottom, it is a call to revive and restore the orderly, disciplined, and authority-respecting America that seemingly held fast before the 1960s. Related, this was the America before the Sixties social movements endowed people of color, women, gays and lesbians, immigrants from strange lands, and other seeming outsiders and fringe characters with the privilege to call themselves Americans.

In this way, Trump’s slogan marks but the latest volley in the culture wars that have polarized the United States for decades. This lecture will explore the grand historical arc of these culture wars with an eye for how it helps us make sense of Donald Trump and a polarized American political culture.

Hartman is the author of “Education and the Cold War: The Battle for the American School” (2012), “A War for the Soul of America: A History of the Culture Wars” (second edition 2019), and co-editor of “American Labyrinth: Intellectual History for Complicated Times.”

He is currently at work on his third book, Karl Marx in America. Hartman is the winner of two Fulbright Awards. He was the Fulbright Distinguished Chair in American Studies at the University of Southern Denmark for the 2013-14 academic year, and he is currently the Fulbright British Library Eccles Center Research Scholar for the 2018-19 academic year. Hartman co-hosts the intellectual history podcast, Trotsky and the Wild Orchids.

Copies of “A War for the Soul of America: A History of the Culture Wars” (second edition 2019), will be for sale and a book signing will immediately follow the program. For more information, contact the Education Department at education@mchistory.org or 309-827-0428.