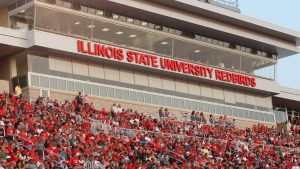 Beginning this fall, spectators of Illinois State University games will be required to transport carry-ins via see-through bags in a measure the board of directors has stated is designed to enhance safety.

Bloomington man stabs self in court after being sentenced

Officials in the McLean County Sheriff’s Department are investigating how a 78-year-old man sentenced for sexually assaulting a girl was able to bring into the courtroom a pocket knife and use it to harm himself. Bloomington resident Johnny Icard, 78, was sentenced in court July 18. According to county officials, Icard pulled out a folding knife with a 3-inch blade and stabbed it into his stomach upon receiving the verdict. Icard was transported to a local hospital for treatment.

Man dies from stab wounds in domestic incident; arrest made

A 22-year-old Bloomington woman has been arrested on suspicion of fatally stabbing an acquaintance: Quantez Brown, 24. According to a news release from the Bloomington Police Department, officers arrived in the 400 block of North Roosevelt Avenue at 1:43 a.m. July 17. At the scene, BPD described Brown as sustaining “a life-threatening stab wound.” He was subsequently rushed to a hospital and later died. Upon further investigation, the woman was arrested and transported to the McLean County Jail. Although an arrest has been made, BPD officials said the investigation remains ongoing.

Residents across McLean County will be asked two advisory questions on this fall’s ballot, following a recent decision. After months of discussion, the County Board on July 17, voted in favor of asking voters the pair of “yes” or “no” questions on two hot-button topics. The first will read, “Should all holders of elected offices in Illinois be subject to term limits?” The second question will ask, “Should the Illinois General Assembly enact a new property tax to pay the Illinois pension obligations?” Neither of the nonbinding questions will directly change laws, but county officials favored the questions to get a sense of voters’ views on the two issues.

A number of McLean County representatives are taking part in a study of the female prison population across Illinois. A new task force, created by the Women’s Justice Institute, is looking to cut the current number of about 2,100 women inmates in half through various programs and reforms. Representatives on the 100-person task force include Liz Barnhart of McLean County Court Services and the Center for Court Innovation and Dawn Beichner, an Illinois State University professor.

After undergoing an 11-week basic training course, a dog named Ryker has joined the Bloomington Police Department’s K-9 unit. The 2-year-old Belgian Malinois will be used to sniff out illegal substances, such as narcotics, and also will be called upon for other issues, including apprehensions and building searches. Ryker will be under the care of his handler, BPD officer Justin Shively.

Bloomington officials have rescinded an economic incentive agreement, first inked 2½ years ago, linked to plans of relocating an existing Kroger store in the city’s limits. Early in 2016, talks surfaced of the mega grocer closing its Normal store at 1550 E. College Ave. and relocating to a nearby parcel in Bloomington. City officials offered the incentive — calling for a rebate of $2.45 million in taxes annually for 10 years — to shepherd the project. The deadline for the project’s completion was early this year. With no progress on the horizon, city officials have gone record in rescinding the offer to the Cincinnati-based retailer.

Beginning this fall, spectators of Illinois State University games will be required to transport carry-ins via see-through bags in a measure the board of directors has stated is designed to enhance safety. As part of the new policy, each spectator will be permitted to bring a minimum of one plastic bag in, plus a small clutch purse. The policy pertains to events held in the Hancock Stadium and Redbird Arena.

The Illinois Department of Homeland Security recently announced it is allocating more than $1.1 million to 10 municipalities across the state for safety-related efforts. The Normal Fire Department is among the recipients, according to state officials. The agency will receive $69,091 and the funds will go toward such efforts as upgrades benefiting first responders. Plans within the NFD also call for purchasing new emergency response equipment.