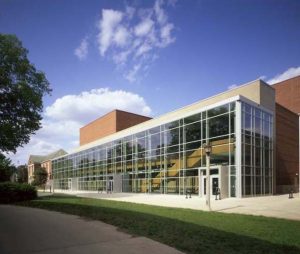 The Center for Fine Arts at Illinois State University is getting state funding for building improvements. (Photo courtesy of visitbn.org)

ISU total enrollment down, but freshman counts up

Illinois State University’s total student enrollment this fall is down less than 1 percent, though the campus is reporting a 10-percent increase in this year’s freshman class.

ISU administrators reported the unofficial figures this past week as the 2018-19 school year got underway.

Illinois State University will see more than $3 million for improvements and repairs as part of the state’s fiscal 2019 capital budget.

More than $57 million in capital funding was appropriated as part of the current FY 2019 state budget.

“These failures had a significant negative impact on students and faculty and the scheduling of CFA facilities,” said Republican State Sen. Jason Barickman of Bloomington.

“These funds ensure the college can get back to operating smoothly and seamlessly. Funding is always needed for the most basic repairs and updates, it’s essential that we continue to recognize that such needs will arise and budget accordingly to cover them,” he said.

Solar Bloomington-Normal is extending the deadline of its discounted solar panel offer to residents in the Twin Cities, according to representatives. The Midwest Renewable Energy Association initially set a deadline for the discounts at the end of September, but instead is pushing the offer out an additional month, through Wednesday, Oct. 31. Solar Bloomington-Normal, a group-buy program, made its initial foray into the region in 2016. It returned this year after acquiring additional solar-generating capacity. Several information sessions related to the program have been announced, including ones at 1:30 p.m. Thursday, Sept. 12, at University Galleries, 11 Uptown Circle, Normal; and 6 p.m. Thursday, Sept. 20, and Thursday, Oct. 4, at Green Top Grocery, 921 E. Washington St., Bloomington.

U of I Extension offering fall gardening webinars

Experts within the University of Illinois Extension will host a trio of fall gardening-themed webinars in the coming weeks as part of the organization’s Four Seasons Gardening Program series.

The lives of notable McLean County persons will be the subject of an upcoming bicentennial-themed cemetery walk at Evergreen Cemetery, 302 E. Miller St.

The walk includes a series of performances that will spotlight the assorted contributions persons born and raised in McLean County have made since 1818. The walks have been scheduled for Saturdays, Sept. 29 and Oct. 6, and Sundays, Sept. 30 and Oct. 7. Performances on each of the four days will take place at 11 a.m. and 2 p.m.

The McLean County Museum of History is overseeing the program. For information, visit the organization’s website, www.mchistory.org, or call 309-827-0428.

The Bloomington City Council is considering language in its municipal code that could place stiffer penalties on landlords found to chronically be in violation of housing requirements. Aldermen recently began discussing the proposal, which could ultimately mean shutting down nuisance properties that are out of compliance. Further discussion is anticipated at upcoming council meetings.

The public will have an opportunity to tour the Ewing Manor, 48 Sunset Road, during a free program slated from 5 to 7 p.m. Thursday, Sept. 27.

The program will include a talk, photo exhibit and glimpse into the life of the family who originally resided at the home.

Today, the venue is known as the Ewing Manor Cultural Center and is under the auspices of Illinois State University. “The Ewing family have been philanthropists, caring for every part of our community,” Toni Tucker, director of the center, said in a statement.

Peoria resident Danny Smith Jr. pleaded guilty on Tuesday, Sept. 4, on charges related to the kidnapping and killing of a Normal man.

Smith was accused of kidnapping Normal resident Maunds Bryant in December 2016. Bryant, who was kidnapped from his home, suffered a head injury during the abduction and later died. Smith will be sentenced in November for the crime.