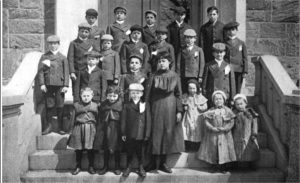 Rochelle Gridley will deliver a presentation, “The Orphan Train in McLean County,” at 4:30 p.m. Friday, Oct. 19, in the Circus Room of the Bone Student Center at Illinois State University.  (Photo courtesy of MCMH)

Matt Sorensen, former chair of the McLean County Board, has completed a 10-month sentence in federal prison.

In early 2016, allegations of Sorensen’s involvement in wire fraud arose, and he stepped down from his elected position as the investigation got underway.

Sorensen, who was serving his time at a federal intake facility in Marion, reportedly has relocated to a halfway house in Chicago as he begins transitioning back into the community. He will be under supervision for the next year.

Local historian to speak at ISU on orphan trains

Rochelle Gridley, local resident and a member of the McLean County Museum of History, will deliver a talk, “The Orphan Train in McLean County,” at 4:30 p.m. Friday, Oct. 19, in the Circus Room of the Bone Student Center at Illinois State University, 100 N. University St., Normal. Gridley’s presentation will explore the work of the New York Juvenile Asylum and how its efforts impacted McLean County.

According to an ISU news release outlining the event, Normal was the hub for a network of social workers deployed throughout Illinois for nearly two decades.

The effort, proponents say, is aimed at cataloging the different businesses operating within the city, which is believed to range from 3,500 to 4,500 entities across all sectors. The ordinance has been met with opposition, namely from the business owners, who will have to pay a one-time mandatory $50 registration fee.

Proponents within city hall, however, say the program will result in more accountability on the part of persons transacting business within the community.

Bloomington residents docking boats and other watercraft on Lake Bloomington will need to adhere to new protocol, following a decision reached last week.

The City Council on Monday, Oct. 8, approved a plan to toughen the construction standards for the docking sites. Officials also approved implementing a one-time $250 permit fee when new docks are constructed, in addition to an annual $50 fee in the following years to maintain the dock.

The city of Bloomington’s official hours for trick-or-treating will take place from 5 to 8 p.m. Wednesday, Oct. 31.

City officials and local law enforcement have passed along a number of pieces of advice for parents and children taking part in the time-honored tradition, including calls to have adults accompany younger children, setting parameters of where older, unsupervised children are canvassing for treats and creating or purchasing costumes that are short enough to prevent tripping.

For more tips, visit the city’s website, www.cityblm.org, or call the Bloomington Police Department at 309-434-2360.

Normal Police are seeking information leading to the whereabouts of resident Mya Crutcher, 14, who was missing at press deadline.

She was last seen wearing a white sweatshirt with the word, “hustle” and dark pants. Authorities are asking anyone with information to call Normal Police at 309-454-9535.

R. C. McBride, a member of the Normal Town Council, will speak on the importance local government plays in a range of issues at a talk slated from 3:35 to 4:50 p.m. Wednesday, Oct. 24, in Room 106 of Schroeder Hall on the Illinois State University campus, 403 W. College Ave. McBride’s talk is in conjunction with an effort underway at ISU known as the American Democracy Project. Its goal is to promote civic engagement between ISU students, faculty, staff, administration and the community at large.