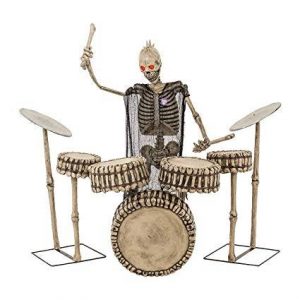 The Illinois Wesleyan University Jazz Halloween concert and costume contest will be from 7:30 to 9:30 p.m. on Sat, Oct. 27 at Westbrook Auditorium. Jazz band alums coming to the concert can volunteer to judge for the costume contest. (Image courtesy of IWU Music Dept.)

Nikita Richards, the Democratic candidate for McLean County clerk, has been cleared on allegations of misconduct, a private attorney concluded this past week. Bloomington resident Kevin Gerrard filed the complaint, alleging Richards, who works for the city’s human resources department, used time on the municipal clock to conduct campaign-related activities. City Manager Tim Gleason hired outside Attorney John Redlingshafer to dig into the matter. Redlingshafer on Oct. 15, announced he did not discover impropriety in his investigation into Richards’ conduct. Richards faces Republican incumbent Kathy Michael in the Nov. 6, election.

Health department teaming up with state agency to fight Hep A

Officials within the McLean County Health Department have announced a partnership with the Illinois Department of Public Health in the hopes of ensuring all persons have access to free or reduced cost Hepatitis A vaccines. MCHD officials have said they are hoping the vaccine will assist all population groups, including the homeless. There have been recent reports of Hepatitis A  outbreaks in neighboring states.

The scope of improvements to the municipal pool at O’Neil Park, 900 N. Hinshaw Ave., could be determined this fall as city officials begin gearing up for a list of improvements in the fiscal year 2020 budget. Officials in the city’s parks, recreation and cultural arts department announced a series of short- and long-term plans for the pool, which has roots going back 45 years. The amenity has pressing repairs needed to open next summer. In the long haul, department staffers have announced a proposed $28.5 million expansion project centered on the pool, making it into an aquatic park. The City Council has indicated it will discuss and could make a decision on how to proceed with the department’s overtures later this fall.

A plan aimed at trimming $250,000 annually from the municipal budget could lead to streamlined functions within two city of Bloomington departments. City Manager Tim Gleason on Oct. 15, announced to the City Council the cost-savings proposal, which would impact the public works and water departments, as proposed. No layoffs are anticipated, Gleason said, but the plan unveiled would reorganize functions between the two departments. The monetary savings reportedly would come from increased efficiency of operations. The council could make decisions on the plan within the next month.

Staffers at the Miller Park Zoo, 1020 S. Morris Ave., have taken the wraps off a festive pair of events this weekend that are geared toward the entire family. The zoo’s annual costume-themed Halloween Spooktacular will be held from 5-8 p.m. Oct. 27, and is $3 for MPZ members and $7 for nonmembers. A series of activities and crafts will be offered on the zoo grounds from noon to 3 p.m. Oct. 28, with the price of admission. Festivities during the afternoon program will include crafts, animal encounters, storytelling and a bounty of candy. For information, call 309-434-2250.

Staffers within the Normal Police Department are in the midst of conducting a community survey in an overture officials say is aimed at getting a pulse on what the agency is doing right — and looking at how it can improve in the road ahead. The survey has specific questions designed to measure and improve the quality of policing in the community. The questions relate to the agency’s overall performance, employee professionalism and community concerns. NPD’s undertaking of the survey is linked to accreditation process the agency is in the midst of seeking. The survey can be taken online via the town’s website, www.normal.org. Paper copies also are available at specific locations throughout Normal, including NPD’s front desk, the local library and on the second floor of Uptown Station. For information, call 309-454-9532.

A proposed five-story, mixed-use building within Normal moved one step closer to reality, following a pivotal maneuver last week. The Town Council on Oct. 15, approved a $29.2 million developer’s agreement with Bush Construction for the project, which municipal officials say fits hand-in-glove into a long-range master plan for Uptown Normal that was inked in 2000. The new facility, as proposed, will have a variety of tenants and be situated alongside the Children’s Discovery Museum, One Uptown Circle and Uptown Station. Further details related to this project will be coming down the pike in the months ahead.

Baseball field improvements and new bocce courts are among the new components envisioned for Normal’s Maxwell Park, 307 N. Parkside Road, town officials have announced. The municipality is in the final stages of securing funding from the Illinois Department of Natural Resources via its open space land acquisition and development grant. The planned spruce-up to the park, located on the town’s west side, is valued at $400,000.