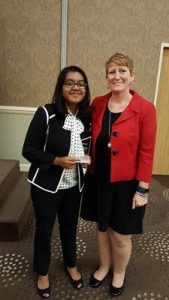 Joblessness across Bloomington, Normal and other areas of McLean County stood at 3.5 percent at the end of September, according to data from the Illinois Department of Employment Security.

In September 2017, joblessness in the county was 3.6 percent, resulting in a 0.1 percent decrease year-over-year. The Bloomington-Normal metro area had a labor force of 94,300 persons, according to the state agency.

Why I See You (YICU), a service awards organization, recently recognized youth associated with the Unity Community Center for their role in ensuring people across the Bloomington-Normal area have their most basic needs met.

The YICU Team Award was given to the Bloomington-Normal Little Free Pantry, a program launched two years ago and serves as a mechanism toward raising awareness of the hunger struggle in nearby communities. 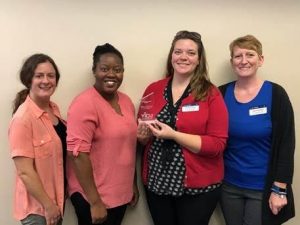 4-H teen teachers Avani Rai, Anagha Arla, Akhila Mattapalli, and Arjun Kale, along with other local youth, have been credited with growing the program to the point it is at today with more than 30 active youth. YICU also has given out individual recognition to 4-H teen teachers Avani Rai, Anagha Arla, Sky Holland, and Akhila Mattapalli for being recognized as YICU Individual Service Award nominees.

The six-day event will restock the Children’s Home and Aid and Crisis Nursery’s pantry for the year with a range of critically needed supplies.

Donations for non-perishable food, clothing, toys and similar items will be accepted at a series of locations throughout Bloomington and Normal throughout the drive. For information, call 309-834-5260 or visit www.childrenshomeandaid.org/stuffthebus.

Assistant City Manager Steve Rasmussen has resigned from his position in Bloomington, officials announced this past week.

Rasmussen’s last official day on the city payroll is Monday, Nov. 12, though he has already ceased working within city hall as he uses up remaining vacation time.

“I enjoyed working for the city of Bloomington,” Rasmussen said in a statement. “Now is the right time for me, professionally and personally, to explore another opportunity.” Rasmussen began working for Bloomington in November 2014.

Plans are in motion to allocate $1 million toward several improvements and upgrades at Miller Park Zoo, following a decision by the City Council on Monday, Oct. 23.

The capital items receiving the green light include additional parking and a new roof at the zoo’s main entrance.

The funds also will go toward the creation of a concession area, which MPZ officials have frequently stated has been a lacking amenity.

A proposal to collect nearly $44.5 million via a property tax levy is on the table in Bloomington District 87 for the next budget cycle in 2019.

The School Board will hold a hearing on the levy proposal in December.

Normal Police are in the midst of investigating an incident involving gunshots being fired in the 800 block of South Fell Street, near Illinois State University’s campus. According to the NPD, officers were called to the scene after 4:30 a.m. Saturday, Oct. 20.

While canvassing the area, officers did uncover an undisclosed number of shell casings. No injuries have been reported. NPD officials are asking anyone with information to call 309-454-9535.

Town of Normal officials, in conjunction with the McLean County Unit 5 School District, are in the midst of applying for a Safe Routes to Schools grant in the hopes of building a hard-surface trail.

If plans proceed, the grant funding would go toward a trail connection from the Karin Street sidewalk, across Anderson Park to Chiddix Junior High School. It also would serve as a link to the College Avenue sidewalk and to Dewey Street. Town officials have indicated they plan to submit the grant in mid-November.