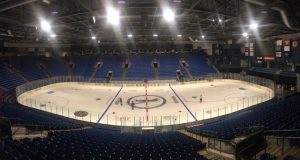 Grossinger Motors Arena in Bloomington. The management of the center is involved in legal matters with the former owners. (Photo courtesy of Grossinger Arena)

Illinois Wesleyan University will host its second annual local iteration of a TED talk on Saturday, March 23. The event, TEDxIWU, will be held on campus, 1312 Park St., Bloomington, from 9 a.m. to noon.

Organizers have touted the program as a venue for showcasing the spirit of innovation across the greater Bloomington-Normal area. For information on the event or to sign up and participate, visit www.tedxiwu.com.

The McLean County Museum of History is in a race against time to restore rare images depicting life in the Bloomington-Normal area and beyond from as far back as the 1830s.

Last year, the museum received a grant to begin restoring 30,000 images that have yet to be digitized and are in danger of complete degradation.

To see through the effort, however, officials are asking for an additional $16,000 to finish the first-tier stage of restoring the images.

For information, contact Executive Director Adam Lovell at 309-827-0428 or alovell@mchistory.org. Some of the images in the current restoration effort reportedly depict visits to the area from such famous personalities as Amelia Earhart and Duke Ellington.

Alison Bailey, distinguished lecturer with Illinois State University’s College of Arts and Science, will deliver a talk, “Her Anger Becomes Her: What I’ve Learned About Anger and Injustice,” at 7 p.m. Thursday, March 21, in the Old Main Room of the Bone Student Center, 200 N. University St., Normal.

Bailey, a professor of philosophy and director of ISU’s women’s and gender studies program, has published a number of works on the topics. The event is free and open to the public.

Qwo-Li Driskill will serve as the featured speaker of the 24th annual Women’s and Gender Studies symposium at 1:15 p.m. Friday, March 22, in the Prairie Room of the Bone Student Center, 200 N. University St., Normal.

Driskill is an associate professor in the School of Language, Culture and Society at Oregon State University. Her upcoming keynote talk at ISU is titled, “Performing Revolution, Scholarship and Decolonial Practice.”

The symposium, free and open to the public, is designed to showcase the work ISU students and neighboring institutions are doing around the cause.

Bloomington Police have arrested a 32-year-old man for allegedly stabbing his roommate in a domestic incident that occurred about 10:50 p.m. Thursday, Feb. 28.

According to an agency news release, officers were dispatched to the scene in the 2600 block of Hall Court shortly after the incident occurred.

The victim, a 43-year-old man, sustained injuries from the stabbing. He told officers the stabbing occurred after an argument. The suspect fled the scene in a vehicle before officers arrived.

BPD officers subsequently located the suspect and arrested him for aggravated domestic battery, aggravated battery with a deadly weapon and unlawful use of a weapon. The victim was transported to a nearby hospital.

VenuWorks, the management firm currently overseeing Bloomington’s much-maligned arena, is challenging a subpoena to turn over financial records in a court case involving the previous firm’s oversight of the facility, which at the time was known as the U.S. Cellular Coliseum and has since been renamed the Grossinger Motors Arena.

Attorneys representing John Butler, head of Central Illinois Arena Management, have been seeking VenuWorks’ financial data. Butler and CIAM had been running the U.S. Cellular Coliseum, but the arrangement eventually was terminated after alleged improprieties in a case working its way through court.

Attorneys representing VenuWorks have stated the company’s current oversight of Grossinger Motors Arena is irrelevant to the case involving Butler and CIAM. A status hearing on the matter is set to take place next month.

A Normal resident’s complaint about conduct at a recent Normal Town Council meeting has made its way to the Illinois Attorney General’s office, according to information from officials within the state agency.

Karyn Smith filed the complaint after she was barred from speaking at a Town Council meeting in early February.

Smith wanted to share her views on the planned demolition of three historic buildings, but officials prohibited her from doing so because the item was not on the agenda. Smith in her complaint alleges town residents should be able to speak on any issue they desire at the meetings. 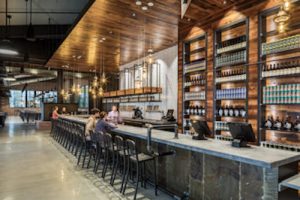 Destihl Brewery in Normal is working on getting its products distributed at places in Delaware and Washington D.C. (Photo courtesy of Destihl Brewery)

Destihl Brewery, a nearly two-year-old operation in Normal, has announced a partnership with Maryland-based DOPS Inc. to expand distribution of its beers to Delaware and Washington, D.C. The agreement was announced Monday, March 4, and begins immediately.

“Having this facility has really opened the door for us to move into new and exciting markets,” Matt Potts, Destihl’s co-founder, CEO and brewmaster, said in a statement.