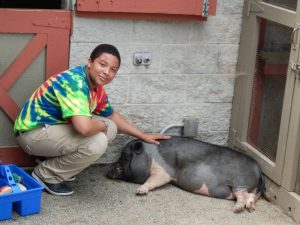 Those interested in becoming a junior zookeeper at Miller Park Zoo must attend an informational meeting on March 2, 3, or 5 from 7 to 8:15 p.m. with a parent or guardian. (Photo courtesy of Miller Park Zoo)

Students who are currently in fifth  grade or higher are eligible to begin participation in Miller Park Zoo’s Junior Zookeeper (JZK) program this summer.

The JZK program is great for students who are looking for experience working with people, learning leadership and time management skills, and spending some quality time with animals. Beginner JZKs attend a one-week summer camp; camp sessions are held throughout the summer.

In order to receive an application, students and at least one of their parents/guardians must attend an informational meeting on March 2, 3, or 5 from 7 to 8:15 p.m. at Miller Park Zoo. Doors will open at 6:45 p.m. and close at 7:05 p.m. Reservations are not needed. There is a fee for the Junior Zookeeper program. Miller Park Zoo is located at 1020 S. Morris Ave., Bloomington.

“I am very pleased to announce Kevin Kothe as the City’s Public Works Director,” says Gleason. “Kevin is the perfect fit for this role and will provide the leadership needed to address existing and future challenges and opportunities. He’s well respected in the organization and industry, with an impressive foundation of integrity, expertise, and commitment to service. This is a big win for the City.”

“I look forward to this role and all of the opportunities it will bring,” says Kothe. “It has been an honor to serve my hometown of Bloomington for 32 years already, and certainly an honor to have been selected for this new role going forward.”

Kothe will be officially recognized as Public Works Director at the City Council meeting on Monday, Feb. 10 at 6 p.m. at City Hall.

The Bloomington Parks, Recreation & Cultural Arts Department is hosting a summer jobs fair on Thursday, Feb. 6  from 5 to 7 p.m. at the PR&CA main office at 115 E. Washington in the Government Center Building (located in Downtown Bloomington).

Applicants aged 15 and above will have the opportunity to meet program directors, discuss job responsibilities for multiple Parks, Recreation & Cultural Arts positions.

For a complete list of positions or to apply early go online to the City of Bloomington’s website at cityblm.org

The Illinois Department of Natural Resources (IDNR) and the Illinois Conservation Foundation (ICF) announced 27 Illinois Schoolyard Habitat Action Grants have been awarded from the fall 2019 application period. A total of $22,477.78 will be distributed.

“The Illinois Schoolyard Habitat Action Grant program provides children and educators with an opportunity to increase the use of native plants in Illinois landscapes while benefitting wildlife species,” said IDNR Director Colleen Callahan. “By participating in these projects, students learn their efforts can make a positive difference in the world, and they gain experience in problem-based learning by planning, developing and maintaining the habitat.”

The Illinois Schoolyard Habitat Action Grant program supports the development or enhancement of wildlife habitat on the school grounds or other public places. Funding for the program is provided through donations to the ICF. The Jadel Youth Fund and the Daniel F. and Ada L. Rice Foundation are the major sponsors for the program. More than $294,000 in Illinois Schoolyard Habitat Action Grant funding has been distributed since the program’s inception.

“We want school children to learn about nature through hands-on experiences,” Callahan said. “It is our goal to have Illinois Schoolyard Habitat Action Grant program projects developed in every county of the state, and eventually at every school. So far, we have supported projects in 85 of Illinois’ counties.”

Applications will be accepted soon for the next round of the Illinois Schoolyard Habitat Action Grant Program, with an application deadline of Nov. 30.  See https://www.dnr.illinois.gov/education/Pages/Grants for the application form and related information, call 217-524-4126 or email dnr.teachkids@illinois.gov.