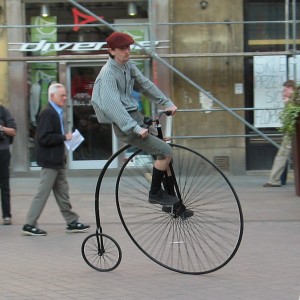 Bloomington City Council is reviewing a new plan that would involve more streets with dedicated bike lanes. Photo by Nova

Faced with a budget deficit, the City Council is tapping into its reserve funds to cover the gap. The council on April 27 voted to move $3.5 million in savings to cover deficits in the solid waste fund and golf courses fund as well as repairs to the U.S. Cellular Coliseum. The council also voted to dissolve the Downtown Bloomington Redevelopment Project Area because the projects covered by the TIF district were completed. The city will pay more than $21,000 in legal fees from litigation stemming from that redevelopment project.

The city is discussing how it can become more accessible for bike users to get around town. According to reports, the City Council is reviewing a new plan that would involve more streets with dedicated bike lanes and create bike lanes that connect to the Constitution Trail that runs through Bloomington and into the Town of Normal. The bike plan would be a multi-year venture and the city council is expected to vote on and discuss the master plan at its May 11 meeting.

A refueling outage at the Clinton Power Station is providing weeks of work to more than 1,500 people, according to reports. The plant is off-line for a few weeks while the refueling takes place. The outages are a benefit to the Clinton area economy as the extra manpower brings in more people to hotels and restaurants, according to the Chamber of Commerce.

Art grants available for this year

The Harmon Arts Grant Program is available now to local art organizations for programs scheduled between July 1, 2015 and June 30, 2016. Programs that take place within the Town of Normal will be given priority as well as applications from nonprofit organizations, and those programs that reach out to seniors, students and low income residents, according to the town web site. The maximum grant award is $5,000. Applications will be reviewed by the Harmon Arts Grant Committee, which will make recommendations to the Normal Town Council, according to the Town web site. The Town Council will decide those who get the grants in June and then present awards in July.

LeRoy Schools Superintendent Gary Tipsord has been honored by his peers by being named as a “superintendent of distinction” by the Illinois Association of School Administrators, according to a news release. Tipsord is among a distinguished group as the honor was given to just 20 superintendents out of the 857 school districts in the state according to reports. Tipsord has been credited for helping to create several programs at LeRoy, including a Cadaver Anatomy Lab in partnership with the McLean County Medical Society, a preschool program and the LeRoy Preparatory Academy alternative school, according to the release.

Illinois college and university students who have already received grants from the Monetary Assistance Program for this school year will not be affected by the state’s budget cuts, according to the Illinois Student Assistance Commission, which oversees the program. The proposed cuts will also not impact students applying for MAP grants for the 2015-16 school year, according to the commission. More than $8 million has been cut from this year’s funding as part a budget agreement to close a deficit for this fiscal year, according to reports, Thousands of students across the state who otherwise would have received a MAP grant for this year will not be getting those because of the current 2 percent cuts, according to reports.

The Illinois Department of Transportation will be holding a series of community meetings across the state over the next month to discuss the state’s infrastructure needs, including roads, bridges and transit systems. The program is being coordinated with the state’s Capital Development Board. The initial meetings will be announced and updated regularly on the web site, www.idot.illinois.gov. Residents, businesses, and local leaders are invited to participant in the sessions.