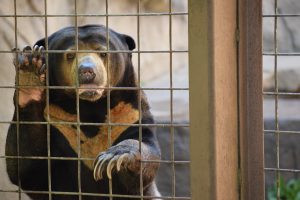 Candy is a main stay at Miller Park Zoo. At 32, she has outlived most bears in the wild whose life expectancy is about 20 years. (Photo by Dave Fidlin/for Chronicle Media)

As is the case with most organizations celebrating an illustrious, long-lived history, Miller Park Zoo’s origins were simple and humble and grew into something much greater.

The Bloomington-based staple has been a crowd-pleaser for generations of people living in McLean County and beyond, and there are a series of recent milestones zoo officials have reason to crow about as sights are set on the facility’s future.

This year, the zoo is officially celebrating its 125th anniversary. While that pivotal moment is reason enough to take pause and smile, the watershed commemoration comes on the heels of another notable feat.

When the city’s fiscal year 2016 came to a close this spring, officials revealed the zoo set an all-time attendance record, welcoming 114,311 visitors — besting a previous record of 113,641 persons that was notched in 2005.

All of the recent excitement is in stark contrast to a venue that quietly emerged onto the grounds of Miller Park. While municipal records are spotty from the late 19th Century, the first known presence of animals within the green space was in 1891. That year, reports of a deer park within the grounds surfaced. 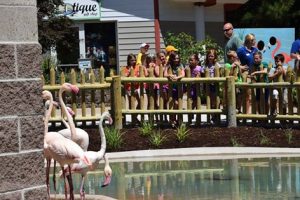 Animals not traditionally seen in the Midwest began making appearances at the zoo in the early 1900s, starting with Big Jim, a young lion cub who allegedly fell off a circus wagon traveling through Bloomington. Big Jim called Miller Park his home for the rest of his life.

From there, the zoo grew by leaps and bounds. But the journey has been bumpy at times. In the 1950s, much of Miller Park, including the zoo, had fallen into poor condition after years of neglect.

Demolition of many of the park’s attractions was considered, but a concerted, collaborative effort between volunteers and civic leaders prevented bulldozers from wiping out the park. Instead, a series of enhancements were made, and the zoo continued its evolutionary path. 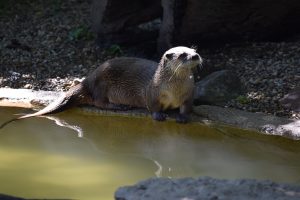 Otters are among the more than 170 species of animals that live at Miller Park Zoo in Bloomington. (Photo by Dave Fidlin/for Chronicle Media)

Anthony Nelson, the zoo’s business manager, said the facility today hosts 638 animals that fall within 170 species. Sixty percent of the zoo’s current collection of animals are considered endangered or rare, based on classifications through a species survival plan set by zoological experts.

The zoo also has some claims to fame. Case in point: the facility houses the oldest known living sun bear in North America. At age 32, Candy is well beyond the subspecies’ life expectancy, which typically peaks at 20 years in the wild.

“She’s one of our more active animals,” Nelson said. “All of the animals get their checkups on a regular basis, and she always does well.”

Over the years, zoo staffers have added a number of exhibits, many of which have become possible through donors’ dollars.

As the zoo’s collection has grown, Nelson said information-sharing efforts have been a backbone of the facility’s mission statement. In addition to giving visitors a birds-eye view into various species — some more readily known than others — the facility in recent decades has stepped up efforts to share information about nearly extinct animals.

“We really do try to have as much of an educational component as possible in what we do here,” Nelson said.

Not that fun and games are not part of the itinerary. Miller Park Zoo has long held a series of family-friendly activities throughout the year, each with an animal-themed twist to it. 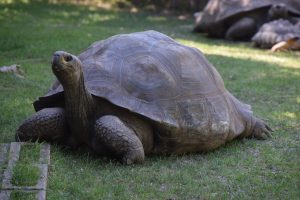 This old tortoise is might not be as old as its home, Bloomington’s Miller Park Zoo which is celebrating its 125th anniversary this year. (Photo by Dave Fidlin/for Chronicle Media)

Recent events have included a Star Wars-themed day, an animal enrichment day and the assorted summer camps that have defined school hiatuses for many local youth.

“We are happy to be welcoming so many guests to enjoy all the zoo has to offer,” Jay Tetzloff, director of the facility, said.

While much has changed since the zoo made its perch within Miller Park in the late 1800s, one aspect has remained tried-and-true: Support from civic leaders and residents has been an important part of its success.

That support is, perhaps, best represented through volunteerism. While Miller Park Zoo employs 13 people, 50 to 60 volunteers round out the facility’s work force on a part-time basis.

The city of Bloomington, which oversees the zoo today, has outlined a series of plans in its municipal master plan to shepherd the facility’s ongoing evolution. One of those objectives, the addition of a flamingo exhibit, is coming to fruition this summer.

“We’re finishing it up, and we’re excited for people to come here and see it,” Nelson said.

THE ZOO THROUGH THE YEARS

1891 — Miller Park Zoo opens; site initially is free and not cordoned off from rest of green space

1991 — Additions are made to the zoo grounds during centennial anniversary; new entryway is unveiled a year later

— Miller Park Zoo celebrating its 125th year with a roar —