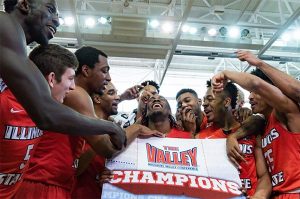 Redbird Arena was unexpectedly open for business last Wednesday but the Illinois State men’s basketball team would have rather been anywhere else.

Instead, ISU entertained California-Irvine in a National Invitation Tournament game on Doug Collins Court after being snubbed by the NCAA.

“Obviously we were pretty disappointed and crushed for a little while after waiting for our name to come up,” said ISU coach Dan Muller said at a press conference. “Mentally it’s tough because obviously we had high hopes, but we’re going to go into this thing (the NIT) trying to win it.”

The Redbirds had a strong case to make the 68-team NCAA tourney.

After an 8-4 start, Illinois State went 17-1 in the Missouri Valley to capture a regular season conference co-championship, won 21 straight home games and had the MVC player of the year (point guard Paris Lee), coach of the year (Muller) and one of the top defenses in the country.

What they lacked was a conference tournament championship — falling to No. 21 Wichita State in the MVC title game and missing out on a guaranteed NCAA berth.

So the Redbirds were left to the whims of the tourney selection committee which apparently deemed ISU not worthy, partly due to a relatively weak schedule rated 123rd in the country.

“The committee decides who they let in, we know that,” Muller said. “Clearly were either the first or second team out, I think. It’s just hard to schedule the games they went us to play. We did everything we could do. We (also) let some games slip early, we know that. But I thought we had done enough to earn the right to get in.”

Muller expressed his frustrations in a low-key manner, but ISU fans weren’t quite so reserved on social media.

“If all this isn’t good enough to make the tournament, when will it ever be? If we don’t make it, we should strongly consider changing to a stronger basketball conference to play higher quality competition to earn the respect from the committee we deserve,” one fan wrote on Facebook.

“Tired of the disrespect and discrimination by the NCAA,” wrote another. “Five times in 10 years in the championship. Four times ignored.”

Illinois State won a regular season conference championship for the first time since 1998, with only an 86-45 loss at Wichita State on Feb. 4 preventing a perfect MVC season. The Redbirds and Shockers split their two regular season meetings.

The NIT liked the Redbirds enough to give them one of four top seeds in the 64-team tourney which concludes March 30 at New York City’s Madison Square Garden.

The Redbirds worked out some of their frustrations against Irvine’s Anteaters and never trailed en route to an 85-71 victory.

Deonate Hawkins scored a team-high 22 points — including a career-high six 3 pointers — as Illinois State (28-6) advanced to the second round of the NIT and a Sunday’s home date with Central Florida.