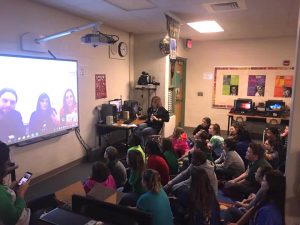 The Unit 5 Educational Foundation has made 21st century applications a priority of its mission. Use of technology was on full display in December 2018 when Fox Creek School students participated in a virtual career talk with staff at Nintendo in Seattle. (Photo courtesy of Unit 5 School District)

The phrase “21st Century learning” is oftentimes mentioned in today’s education arena, and one concept — technology — frequently enters the equation.

While equipping students with personal devices, such as iPads, and other state-of-the-art electronics is front-and-center of tweaking curriculum to meet today’s standards, a 7-year-old McLean County organization is ensuring schools receive support in a number of other areas as well.

The McLean County Unit 5 Educational Foundation, a largely volunteer-driven organization helmed by 11 board members, was established in 2012 to help fill in some of the funding gaps for the Normal-based school district.

“It’s a relatively recent organization,” said Carla Van Dongen, the foundation’s board president. “It was established, initially, by a couple of parents, with the support of the school district.”

While bringing new technology to Unit 5 classrooms was an initial impetus for the foundation’s establishment seven years ago, Van Dongen said the organization has evolved over time.

Foundation members frequently award grants falling within one of four pillars under the broad spectrum of 21st Century education.

In addition to technology, grants have been awarded under the categories of curriculum, environment and experiences.

“We have a very generous community, and people have been stepping up,” Van Dongen said. “We want to help educators provide a true 21st Century educational opportunity, districtwide.”

A recent brochure from the foundation demonstrates some of the efforts that have been supported.

Under technology, the foundation has awarded $400, per student, for speech generating apps, up to $200 for iPhones, $300 for iPads and $50 per set for robot blocks. 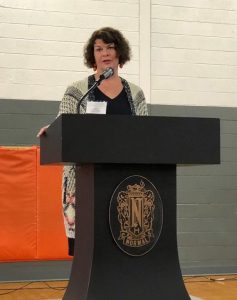 Van Dongen said the foundation also has been an ardent supporter of field trips, where $200 has been pledged for each bus required to transport students to and from school and a venue. Also in the mix has been a pledge of $25 to $100, per class, for art supplies.

One of the most important aspects of a 21st Century classroom, Van Dongen said, is its overall environment.

With this thinking in mind, the foundation has offered up funding in the amount of $800 for teamwork tables and $50 for beanbag chairs to support calming, among other furniture.

In the road ahead, Van Dongen said she and others have high hopes for the foundation and its role within the broader Unit 5 ecosystem.

“We’d like to grow our volunteer base,” she said. “We’re also hoping to grow our focus. It will still include technology, but we’re hoping it will be much broader than technology.”

Additionally, Van Dongen said she and other board members aspire to increase the group’s visibility with different events. An annual breakfast gathering, which occurred for the third consecutive year in early October, is the start of such an overture, she said.

For information on the McLean County Unit 5 Educational Foundation, or to donate, visit the organization’s website, www.unit5edfd.org, or the group’s Facebook page.