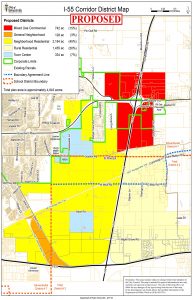 With the Edwardsville area experiencing rapid industrial growth, officials are moving to expand the town’s I-55 Corridor Development Plan across a nearly 5,000-acre area of Madison County this summer.

Although so far relegated mostly to Edwardsville and neighboring Glen Carbon, the I-55 Development Corridor Development Plan was originally proposed by Edwardsville planners in 2003 to coordinate growth along the interstate highway across a wide swath of unincorporated Madison County from I-255 north.

A revised version of Edwardsville’s I-55 Corridor Development Code, specifically designed to provide appropriate regulation and zoning over an expanded area, is being considered by city officials at a series of meetings this month.

Madison County officials have announced they will continue their consideration of the updated plan after it is finalized by Edwardsville.  The Glen Carbon Village Board approved the plan in January.  Officials in the City of Troy are reportedly considering implement of at least some aspects of the plan.

The updated I-55 Corridor plan is designed in part to address development in the fast growing areas of Edwardsville and unincorporated Madison County at the intersection of I-55 and Ill. Rt. 143.

Since first proposed 13 years ago, the I-55 Corridor plans has also been revised to allow for more “urban-rural” land use to reflect the area’s present character and scale back some development plans in line with the nation’s post-recession economic recovery.

The council’s Administrative and Community Services Committee took public input on the proposed zoning and regulatory code, during hearings on June 9 and 15.

Emerging as an issue during those hearings was the draft code’s proposed “brick rule,” which would require “all structures have a minimum of three sides of the exterior walls constructed of at least 50 percent brick, brick veneer, stone, masonry, masonry veneer, EIFS (Exterior Insulation Finishing System), stucco, precast concrete and/or split face block from the ground level to the building’s eaves.”

The rule would apply to all single-family detached housing, villas and attached structures, and estate and countryside tract lot buildings.

With brick construction a proud tradition in St. Louis-area neighborhoods from Carondelet to Granite City, proponents say the rule would help protect the I-55 Corridor from shoddily constructed tract homes, which would ultimately lead to declining neighborhoods and property values in the area.  Aldermen report many Edwardsville residents support the rule.

However, the Greater Gateway Association of Realtors and Home Builders Association of Greater Southwest Illinois contend the rule would effectively price new Edwardsville-area homes —  which already begin in the mid-$200,000s —  out of the reach of many.

Local builders say the rule also would arbitrarily limit the new home market by discouraging styles such as increasingly popular craftsman homes, which are often built with shingles instead of brick.  They also contend the rule could effectively prohibit the use of innovative new, energy-efficient building materials as they are introduced to market.

Residential development in the I-55 Corridor is anticipated to occur gradually over the next 20 years or more, planners acknowledge.

Some Edwardsville council members suggest an answer might lie in expanding the code’s planned unit development option, under which standards for building projects on a case-by-case basis.

The I-55 Corridor Plan is for the 4,843 acres of land in Glen Carbon, Edwardsville and Madison County that remain largely undeveloped. There would be 742 acres of mixed use/commercial, 128 acres of general neighborhood, 2,184 acres of neighborhood/residential, 1,455 acres of rural/residential and 334 acres of two town centers.

The proposed development code can be accessed at  http://www.co.madison.il.us/departments/planning_and_development/i-55_corridor_plan.php