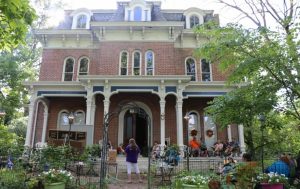 Alton touts the McPike Mansion as part of embracing its reputation as a paranormal tourism location.  The house is one of the most studied haunted sites in the nation, according to the book “Small Town Ghosts.” (Photo courtesy of visitalton.com)

“One of the Most Haunted Small Towns in America” is a title many communities would likely not relish. However, with interest in the paranormal apparently growing nationwide, Alton is increasingly embracing its reputation for ghosts, apparitions, and mysterious tales of the past.

“History haunts us, and it is definitely haunting Alton, Illinois,” the Great Rivers & Routes Tourism Bureau (formerly the Alton Convention & Visitors Bureau) proudly proclaims on its “Haunted Alton” webpage; hoping to build on a growing stream of both curious tourists and dedicated ghost hunters.

With a growing number of Southwestern Illinois sites now listed by various publications and websites as potentially “haunted,” other Metro East communities might well follow suit.

“A sordid past of murder, war, death and destruction has led to Alton’s haunted present,” the tourism bureau notes on its website, in a type of boast unusual for tourism agencies.

Tales of the Civil War, the Underground Railroad, racial unrest, desecration of Native American lands, the killing of abolitionist Elijah Lovejoy, epidemics and various other tragedies, murders, suicides, and natural or accidental deaths have all contributed to the city’s reputation for hauntings.

Alton was first described as one of the most haunted small towns in the U.S. in “Haunted Alton: Ghosts of the Riverbend Region,” a 1999 comprehensive guide to Riverbend area haunted site by nationally known, paranormal enthusiast Troy Taylor of Jacksonville. His nationally-known Haunted America Conference will be held in Alton in June 2019.

Local lore holds that during the Civil War, some 1,400 Confederate soldiers died due to a smallpox outbreak in the old Alton Prison. When the prison was demolished after the war, salvaged bricks were used in hundreds of homes and business building throughout the city; each brick taking with it the spirits of deceased soldiers which would haunt the new structures for years to come.

The city’s “most haunted house,” according to the tourism bureau, is the landmark McPIke Mansion, which overlooks Alton from Lookout Point on the city’s famous river bluffs. It is one of the most studied haunted sites in the nation, according to “Small Town Ghosts,” a widely read tome by Monmouth, Ill paranormal devotee Barb Huyser. 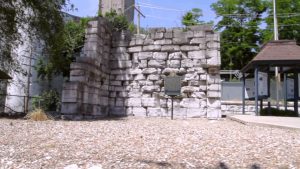 The old Alton Prison, a former prison for Confederate soldiers, is considered a top haunted attraction for the Southwest Illinois area. (YouTube photo)

Built in 1869 for prominent botanist, winemaker and businessman Henry McPike, the ornate building is home to as many as 11 ghosts, according to a variety of ghost hunters who claims to have seen or even spoken with the spirits over the years. The ghosts reportedly include Mc Pike, his family, and household servants. Well known among aficionados of the paranormal is a video, recorded in the mansion’s wine cellar, of a purple mist which appeared and seemed to interact with those in the room.

The house and surrounding 15 acres were purchased at auction in 1994 by area residents Sharyn and George Luedke, who hope to convert the long vacant and deteriorated building into a bed-and-breakfast a banquet center.  During renovations, workers have reported sounds of movement in the house, objects appearing and disappearing, and even visual sightings of male ghosts.

Like the mansion, Alton’s First Unitarian Church, and Milton School are considered “extremely haunted,” according to the Alton CVB. Both have been featured on the Travel Channel and Syfy Channel.

Such cable television programing has spurred interest in the paranormal nationwide, according to Mark Farley of Dupo, a cofounder of the St. Louis Paranormal Research Society. 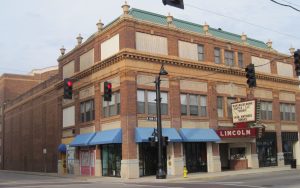 The Lincoln Theater at 102 E. Main St. opened on Oct. 6, 1921. It is considered a place of interest by paranormal enthusiasts.

Catering to the growing interest in Alton ghosts for more than 25 years has been the Alton Haunted Odyssey; which offers three-hour “trolley tours” to some of the city’s most famous haunts. Established in 1992 by a psychic known as “Antoinette” and local business woman Marlene Lewis, the firm this year has begun offering a Haunted Craft Beer Walk of five haunted locations. Video recording and ghost hunting equipment are encouraged.

In addition to offering highly popular tours of the Gateway City’s infamous Lemp Mansion, the St. Louis Paranormal Research Society offers tours and organized investigations at the Alton YWCA and the Pere Marquette Lodge in Grafton.  Some equipment such as digital thermometers and EMF meters are provided.

The YMCA was the site of an infamous accidental double killing in the 1930s. The Pere Marquette Lodge was reportedly built on a Native American burial site.

Next year the society plans to begin investigating the legendary Phantom Funeral of Fort Chartres in Prairie du Rocher; where locals, since 1889, have reported silent, midnight processions of up to 40 occupied wagons — one carrying a coffin. But only in years when the Fourth of July falls on a Friday.

The Luedkes — who say they did not know the McPike Mansion was haunted when they bought it — now offer monthly, paid tours of building, grounds, and crypt. Proceeds go to offset the $1 million-plus cost of the still ongoing renovations. Tours offer opportunities to communicate with spirits using Dowsing rods, a trip to the cellar and “a Dark session in the Cellar with our Medium, Sandy Little Lizard,” according to the McPike Mansion website.

Taylor’s American Hauntings Tours offers both guided tours and fully equipped investigation of Alton and Grafton, as well as Jacksonville, Lebanon, Decatur, Chicago and Carlinville. His Haunted America Conference — billed as “America’s Original Ghost Conference” in the wake of similar events now springing up around the county — rotates among three Southern Illinois cities and was also held in Alton last year.

The Lemp Mansion in St. Louis said to be one of the 10 most haunted places in America.  It is the site of four suicides by members of the Lemp Brewing Co. family.  (Photo courtesy of Lemp Mansion)

Since publishing his first book, “Haunted Decatur,” in 1989, the Illinois prairie native has published some 120 volumes on crime and the paranormal. Eleven are devoted to Illinois topics, including “Phantoms in the Looking Glass: History and Hauntings of the Illinois Prairie” (centering around Lebanon, IL); “Weird Highway: Illinois,” which examines the “History, Hauntings, Legends & Lore of U.S. Route 66,” and “Bloody Illinois”; part of a series on crime and unsolved mysteries.

Taylor’s catalog of books — as well as a new JuJu Paranormal Pursuit Board and “Real Ghost Hunter” shirts — are offered online as at his American Hauntings Ink store, 228 S. Mauvaisterre St., in Jacksonville.