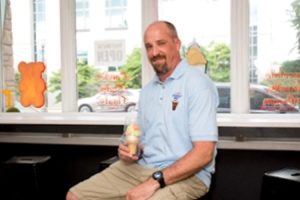 Each Ice Cream Caddie contains any mess or dripping that may occur when transporting an ice cream cone. The unique, functional, multi-purpose design consists of a three-piece container. The bottom portion allows for dripping and maintains the structure of the cone, keeping it from being damaged or crushed.

The center tray serves to stabilize the cone and is slotted from dripping, and the top lid keeps the ice cream itself intact, keeping the cone covered and cool.

Hughart quickly found that none of the top fast food chains and convenience stores offered any options for transporting to-go cones safely and securely. He realized there must be a better way to do this and immediately made it his mission to create the first ice cream cone to-go container.

He taught himself 3-D printing, while adjusting and perfecting his design. Soon thereafter, a prototype was created.

In May 2018, Hughart took his idea to producers of the TV show “Shark Tank,” where he gave a short pitch and explained his prototype. While the producers loved his idea, they recommended he come back once he had sales. He said he is grateful for the “Shark Tank” experience, and plans to return to audition once sales are coming in.

After talking to multiple ice cream shops, feedback has been quite positive. Some shops want to replace their various sundae cups/lids with Ice Cream Caddies. Other shops see Ice Cream Caddie as a way to safely serve cones through their drive-thru window. Consumers want to buy it for their homes, so kids don’t spill ice cream cones served at home.

Along the way, the SBDC and Wieland provided Hughart assistance with obtaining his LLC, marketing research and various referrals.

“Marti has helped open many doors along the way,” Hughart said. “This has led to making my company what it is today.”

“It has been a pleasure to work with Jeff,” said Wieland. “One of my first memories of eating an ice cream cone was how most of it dripped off my elbow! Jeff’s invention is a great idea, and I am confident it will be successful. He saw an opportunity and pursued it — the mark of a true entrepreneur.”

Hughart has used the food-to-go nature of the current COVID-19 pandemic to his company’s benefit.

“We were hesitant at first to launch during this time, since we didn’t know how the ice cream industry would be affected,” Hughart shared. “But we took a chance and found with the increase in carry-out foods, the timing actually couldn’t be better. Ice Cream Caddies offer a much more sanitary and safe way of getting your ice cream during the pandemic.”

Hughart is passionate about making people smile through his work and is thankful for all of the support he has received.

Looking to the future, Hughart plans to turn Ice Cream Caddie into a successful company. He hopes it becomes an essential product in every ice cream store, fast food chain and convenience store, revolutionizing what it means to take a cone to-go.