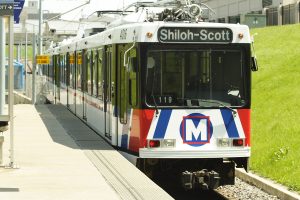 MetroLink/Bi-State Development does not anticipate any fare increases over the next 12 months but it has requested increased funding this year from the City of St. Louis, St. Louis County, and St. Clair County — all of which levy sales taxes to subsidize transit operations. (Photo courtesy of Bi-State Development)

The executive committee of the Bi-State Development Board of Commissioners, at its Sept. 12 meeting, reviewed a bond refinancing plan that will save between $45 and $50 million — and provide $20 million for improved security on transit lines.

The refinancing plan could now go before the full board as early as Sept. 27.

However, it apparently will not mean an end to financial, political, labor, security and service issues surrounding the agency.

Ridership on Bi-State’s bus and light rail lines has decreased more than 20 percent over the past five years; spurred in part by a series of violent incidents on or near MetroLink trains or boarding platforms – including those in Fairview Heights and Washington Park.

“We are experiencing the same erosion of ridership in St. Clair County as they are in Missouri,” Bi-State President and CEO Taulby Roach told a St. Louis television station last year.

Fiscal trends for the agency over the past several years are “unsustainable,” according to the minutes of a budget overview presented by Roach during an Aug. 20 joint meeting of Bi-State Board’s Operations Committee and Audit, Finance & Administration Committee.

Bi-State staff point to signs of a potential turnaround.

A major transit system redesign, known as “Metro Reimagined” program, this fall will entail the largest overhaul to Missouri bus routes in 15 years, according to Roach’s budget overview.

With an “emphasis on safety and security, better service connectivity and comfort,” the program “is expected to provide a catalyst for a resurgence of ridership,” according to the presentation.

The agency does not anticipate any fare increases over the next 12 months. 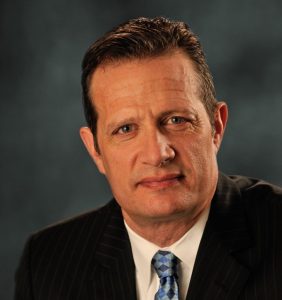 Bi-State has requested increased funding this year from the City of St. Louis, St. Louis County, and St. Clair County — all of which levy sales taxes to subsidize transit operations.

Those increases are not anticipated entail any increases in sales tax rates, according to Bi-State staff.

However, St. Louis County officials are miffed that they are being asked to increase financial support to Bi-State, even as the agency cuts service to the county and has not yet issued firm plans to increase security.

Bi-State this year is requesting some $164.3 million from St. Louis County.

While the bond refinancing plan was formally approved by the St. Louis County Council on Aug. 20, council members still plan to hold public hearings on Bi-State’s finances and operations over the coming weeks.

The $20 million in additional security funding, made available by the bond refinancing, will be placed in a special trust, which will be used to fund security measures as they are implemented, according to Roach. Metro Transit is currently proceeding with a competitive procurement process for its contract security services.

However, the agency is still attempting to settle a dispute over retirement benefits, with MetroBus and MetroLink operators, mechanics and clerical employees —all represented by ATU Local 788.

At present, the pension fund for operators, mechanics, and clerical employees is underfunded by more than $83 million. According to a Bi-State press release, 77 percent of all current pension contributions are paying for previously earned benefits for both retired and current employees

After lengthy negotiations, Bi-State has joined Local 788 in a non-binding dispute resolution process. Resolution is now in the hands of a neutral fact finder.

However, since July, bus drivers and other employees have been calling in sick as a form of labor action; causing some service delays and, on at least one occasion, cancellation of Bi-State’s Red Bird Express service from St. Clair Square. 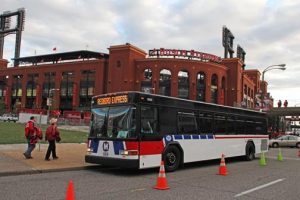 However, Madison County, under the new Bi-State budget, is providing $100,000 in funds for the agency’s St. Louis Regional Frieghtway economic development effort.

A Comprehensive Annual Financial Report (CAFR) for Bi-State Development Agency, covering the fiscal year ended June 30, is due for public release in November.  State law requires the agency to file a CAFR within six months of the close of each fiscal year.

Beyond its Metro bus, light rail and ATS systems and the Freightway program, Bi-State operates the Gateway Arch and adjacent riverfront attractions; the St. Louis Downtown Airport near Cahokia; an in-house research arm known as the Bi-State Development Research Institute; and Arts In Transit, a non-profit entity that supports public art and community engagement programs.

In addition to the appropriation of regional sales taxes from St. Louis County, the City of St. Louis, and the (SCCTD), Bi-State’s primary revenue sources include: federal grants, the Illinois Department of Transportation IDOT), the State of Missouri, passenger fares, and auxiliary income.

In Illinois, funding comes primarily in the form of capital contributions, from the State of Illinois and St. Clair County Transit District; and payments for transit services from the transit district.

IDOT is authorized to provide Bi-State up to 100 percent of the local share requirements for capital improvement projects.

In addition to the full local match for infrastructure projects located in Illinois and for buses providing service in Illinois, IDOT generally covers a share of Missouri capital projects that benefit Illinois riders.

Established as an interstate compact between Missouri and Illinois in 1949, the development agency was commonly known as Bi-State until 2003; when it began using Metro in public statements and advertising. It switched back to Bi-State about three years ago as part of a move to provide greater services in Metro East.