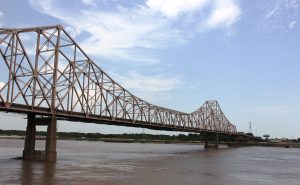 The Illinois Department of Transportation (IDOT) has announced plans to begin shutting down highway construction projects across the state as early as June 30, due to the budget battle between Gov. Bruce Rauner and the General Assembly.

Lawmakers and the governor last week acknowledged that for the second time, they would not meet a July 1 deadline for passage of a new state budget.

The IDOT construction shutdown could immediately affect up to $130.6 million in road projects planned for fiscal year 2016 in IDOT District 8, which encompasses Metro-East.

Longer term, the budget stalemate raises concerns about an ambitious, six-year highway improvement package, under which IDOT plans more than $400 million in Metro-East road and bridge projects, beginning as early as fiscal year 2017 or 2018.

IDOT officials are hoping the General Assembly will act to save at least the highway projects that are currently underway, when lawmakers reconvene in special session today (June 29) to consider stopgap spending legislation.

At the Chronicle’s deadline, working groups of Democratic and Republican lawmakers were attempting  to hammer out details of two highway spending measures (HB 6585/SB 3435) that would keep 2016 road projects funded.

The legislation would authorize the use of $550 million in revenue from bonds recently sold by the state to help pay for road projects.

The construction shutdown, announced by IDOT June 22, would halt at least five major highway projects that are currently underway in Metro-East:

▪ construction of a new off ramp from the Martin Luther King Bridge to westbound Interstate 55/64 near East St. Louis;

▪ widening of Illinois 3 from two lanes to five lanes in Waterloo;

▪ replacement of the Illinois 157 bridge over St. Clair Avenue and the MetroLink tracks, between Fairview Heights and East St. Louis; and

Currently one lane is closed on westbound I-55/I-64 approaching the Mississippi River, as a result of the King Bridge off ramp construction.  The King Bridge project is currently about half completed, according to IDOT spending records.

Illinois 157 is currently closed at St. Clair Avenue due to the bridge construction, which is roughly one-third completed, according to IDOT records.

The Illinois 15 bridge at Illinois 13 is five-sevenths complete, according to IDOT records; however, traffic is still being detoured. 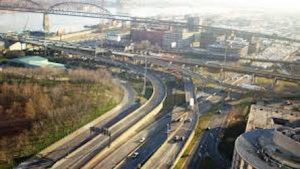 The Illinois 3 expansion covers a 3.5 mile section of roadway in Waterloo and is a little over half-completed, according to IDOT records.

Rieder Road, a major arterial road connecting I-64 with Scott Air Force Base and a number of O’Fallon streets, is currently closed to all but local traffic in the two-mile stretch from U.S. 50 to Wherry Road. The project is currently slated for completion in May 2017.

IDOT’s warning of a statewide highway construction shutdown comes just a month after the department’s May 26 release of its new $11.2 billion, six-year comprehensive road and bridge plan.

The additional King Bridge ramps, Poplar Street Bridge connector, and Madison County I-70 improvement projects are, at least at this point, slated to begin in 2017.  The improvements along I-70 in Bond County and along I-255 are currently scheduled to begin in 2018.