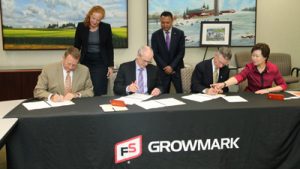 For the Cahokia, grain terminals along the Mississippi River, it would seem an inauspicious time for a trade war between the between the U.S. and the People’s Republic of China.

Now endeavoring to become a worldwide agribusiness powerhouse — on par with giants like Bunge, Cargil and ADM— COFCO has development an integrated international network of commodities shipping, storage, processing, and trading enterprises “with unique access to emerging markets …. Including China,” the conglomerate’s website notes.

As part of that initiative, COFCO and Growmark, in August 2017, announced their new COFC-Growmark LLC partnership to procure, transport and sell corn, soybean and Midwestern corn, soybeans and other farm commodities around the world.

Days later, Cahokia became part of a network of COFCO ports around the world; including facilities in Myanmar, Kazakhstan, Ukraine and Indonesia.

COFCO-Growmark, LLC, acquired its own truck, rail and barge terminal in Cahokia, previously owned and operated by the Dutch international agribusiness and trading company Nidera.

The COFCO-Growmark terminal by itself can receive about 4572.24 metric tons of produce per hour, delivered by truck and rail.

The facility has six truck receiving lanes. A 34,500-foot railroad loop, with two “pits” below the tracks for the unloading of grain or grain products, allows for simultaneous unloading of two trains at a time.  Meanwhile a pair of 1,600-ton-per-hour loading belts can transfer grain to two barge-loading docks at once.

Any overflow can be quickly transferred through the neighboring Consolidated Grain and Barge Company (CGB) and Louis Dreyfus terminals, COFCO administrators note.

Accessible by way of an Alton & Southern shuttle from all U.S. Class I railroads, the Cahokia terminals are well situated to receive grain from throughout the Midwest, COFCO executives note.

While much of the grain initially transferred through the Cahokia facility was expected to come from Illinois farms, Growmark’s St. Louis office quickly set about sourcing additional commodities for export from other Midwestern state.

Then, on July 6 of this year, Beijing announced a 25 percent tariff on U.S. soybeans in retaliation for measures imposed the same day on Chinese goods by President Donald Trump.

China is the world’s largest consumer of soybeans — which are used primarily as feed by the pork industry.  Pork is mainstay of the Chinese diet.

Amid the backdrop of a trade war between China and the United States, Cahokia’s grain terminals play an important part of a new deal between Growmark, Inc. and China National Cereals, Oils and Foodstuffs Corporation.

Some 60 percent of the U.S. soybean crop was exported last year, according to the United Soybean Board.

China is America’s largest soybean customer; accounting for 63 percent those U.S. soybean exports annually, according to the USDA.

The Chinese purchase about 25 percent of Illinois’ soybean crop each year, according to the Illinois Soybean Association (ISA).

Following last month’s announcement, soybean prices nationwide fell from around $10 per bushel at the beginning of the year to around $8.85.  That marked a 13 percent decline since the start of year and a 10-year-low.

That presents some serious concerns for Illinois soybean farmers and related, according to Todd Hubbs of the University of Illinois (UI) Department of Agricultural and Consumer Economics.

“Illinois soybeans are a powerful commodity driving powerful commerce with a footprint covering roughly a quarter of the state. Unfortunately, a 25 percent tariff on U.S. soybeans into China may have a significantly negative impact on soybean farmers in Illinois,” the ISA concurs.

Research conducted by the association with Informa Economics IEG finds that soybean farming, crushing, and closely related industries account for $28.3 billion in sales and 114,500 jobs to Illinois.

Ironically, the China-U.S. trade war has had little effect so far on operations at the promising new China Foods-Growmark grain terminal in Cahokia — in part because the terminal handles more corn than soybeans, reports Hugh Whalen, a commodities risk consultant at Growmark’s Bloomington headquarters.

Perhaps most importantly, both Midwestern farmers and the burgeoning Cahokia export industry may be a little less susceptible to the adverse effects of U.S.-China trade squabbles, than American soybean farmers as a whole, Whalen suggests.

Most U.S. soybeans exports to China are shipped through ports in the Pacific Northwest; while bean transported down the Mississippi River and through the Port of New Orleans are generally bound for “non-China” destinations, he says.

Other major soybean markets around the world include: Mexico, Indonesia, Japan, Taiwan, Germany, Spain, Netherlands, South Korea, or Turkey, according to the National Oilseed Processor Association.

With China is now relying on its top soybean supplier, Brazil, to make up for the loss of its second largest supplier, the U.S., Brazilian soybeans “are now going at a premium,” Whalen said. And that could ultimately present an opportunity for Midwestern farmers, he adds.

That means non-China buyers of soybeans may increasingly turn to Midwestern soybeans as an alternative to increasingly pricy Brazilian beans, thereby shoring up demand and prices here, Whalen predicts.

The next 10 largest soybean exports together represent only half the demand of the Republic of China, according to NOPA figures.

“The EU doesn’t buy that much soybean” and could not make up for the loss of the Chinese market, he says.

Hubbs does not envision widespread farm failures across Illinois. He believes the fortunes of soybean farms this year will be determined on an individual basis.

Farmers who locked in “pre-tariff” prices through advanced sale contracts early in the year, as he believes many have, “should be alright.”

However, farmers who are “over-leveraged” with land lease or other costs could see problems.

Still unknown, according to a UI white paper: whether crop insurance will cover, or adequately cover, losses sustained because of the unusual market conditions.

Under the complex rules established for crop insurance programs, coverage limits will ultimately be determined by the size of this year’s crop.