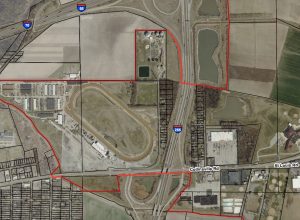 Approval came on a three-two vote with Mayor John Miller casting the deciding vote and council members Nancy Moss and Jeff Krypta voting against the plan.

The redevelopment area extends from the grounds of the Fairmont Park racetrack to the Horseshoe Restaurant, and also includes a section of fronting property along Bluff Road.

City officials have not named developers interested in the area or businesses who might become tenants in the redevelopment district.

The TIF district will be supported by a new one cent retails tax on purchases in the shopping area, according to City Manager Mitch Bair. The sales tax will be applicable only in the development district, not citywide, Bair emphasized.  Groceries will exempt, he said.

Approval came after the city, over recent weeks, agreed to remove a number of parcels from the redevelopment and TIF districts.  The TIF and development district plans were pulled from the council’s June meeting agenda at the last minute, to allow city hall staff to delete the parcels from the development plan.

Also clearing the way for approval of the development district: hold-harmless agreements under which the city will share some of the TIF funds with other local taxing entities — most of which had previously opposed the redevelopment plan.

Under a memorandum of understanding (MOU) with the Collinsville School District, the new fiber optic cable is used to facilitate internet access at an elementary school in the redevelopment area. That, in turn, will allow the school to provide state-of-the art online home study programs, according to the MOU.  The city, however, will not pay for internet service at the school.

Critics of the redevelopment plan say it effectively threatens residents and businesses in the area, many of whom could now lose their homes or business locations due to increasing rents or eminent domain.

The redevelopment area included 541 residences — many home to retired persons, low-income individuals, or young families who may not have the desire or financial resources to relocate, critics say.  Many residents and businesses have been in the area for years, they add.

The city already has three TIF districts, implemented in a total of five phases.

Mayor Miller contends the existing TIFs were necessary to spur redevelopment of the city’s downtown area and allow construction of the Gateway Center, which spurred development of the surrounding Eastport Plaza office, hotel and dining area.

The new TIF similarly will be essential if the St. Louis-Collinsville Road area is to be revived, he contends.

The Collinsville City Council first proposed a TIF and redevelopment district plan for the area in 2008, but quickly tabled the effort in the wake of objections from local residents and a national downturn in the real estate market.

The plan approved last week was first introduced in 2012.