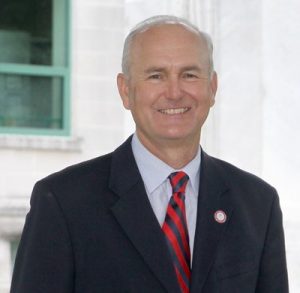 Despite formidable competition from some well-known and well-financed Chicago political heavyweights, downstate candidate Bob Daiber of Marine believes his bid to become the 2018 Democratic nominee for governor of Illinois is picking up steam.

“I am running for governor of Illinois to provide a period of stability,” Daiber says, adding that message seems to be resonating with voters both in Chicago and downstate.

The Illinois’ overall fiscal instability and continuously mounting debt are “wreaking havoc on the economy and the image” of Illinois, he says

“People see me as an average person, but with 38 years’ experience in education and government, who can solve problems and get things done,” Daiber says.

The current Madison County Regional Superintendent of Schools and former teacher has served as a township and municipal official, Madison County board member and countywide elected official, well as president of the Illinois Association of Regional Superintendents of Schools. He has long been active in education, health, labor, and older adult issues.

The first step in Daiber’s strategy for fiscal stability in Springfield would be to effectively consolidate and refinance the state’s $11 billion in short-term debt over an extended repayment through a bond issue. Bond proceeds would go to “make whole” the state’s current creditors — including vendors, contractors and local government entities such as school districts — over a period of three years, Daiber says.

Refinancing of the state’s short term debt, along with cost savings measures, would balance the state’s annual budget, Daiber says.

Cost savings for greater state efficiencies might be attained through a review of the current operations of the state’s Central Management System, according to Daiber. Daiber says he would also work to eliminate duplicative state functions, and reductions in salaries for some state positions — notably members of some gubernatorial appointed commissions.

Such governmental efficiencies could be accomplished responsibly, Daiber says. With a background in township, county and regional, Daiber says he respects the importance of local government and will be able to successfully work with local officials to carry out needed services to Illinois residents.

“I am one candidate who has actually overseen a governmental consolidation process; having served as the President of the Illinois Association of Regional Superintendent of Schools when the number of regional offices was reduced to 35,” Daiber notes.

Having balanced the budget, Daiber would pursue a progressive state income tax structure, with brackets from 1 percent to 6 percent, to increase revenue, long term, to the state and, in turn, state-funded entities.

A progressive income tax would not deter business development, Daiber asserts; noting Illinois is one of only four states with a flat tax.

Daiber hopes to have a progressive tax in place by 2020; with the state then realizing increased revenue in 2021. The change would require a state constitutional amendment, he notes.

In addition, Daiber says he would pursue property tax reform. Real estate assessment and tax abatement practices have long been controversial in many areas of Illinois – including Metro-East, Daiber notes.

While Daiber is in favor of changes in the state funding formula for local school districts, the regional school superintendent adds “there is no point in changing the funding formula if you do not have the revenues necessary,” Daiber says.

Not only is achieving fiscal stability in Illinois politically feasible, Dabier says, so is his goal of victory in next year’s Democratic primary and fall general election.

However, Daiber believes his name recognition has increased four-fold over recent weeks as the result of an ongoing media outreach initiative that so far resulted coverage in the Chicago Sun-Times, Politico, and other publications, as well as a series of Chicago area radio interviews and an appearance on Chicago Tonight.

He believes the pivotal moment in the gubernatorial contest will come this summer as several major statewide political support organizations make their endorsement.